It has been cold here. We received more snow here, prompting a British colleague to ask me when it would ever stop.

The weather prediction for the next couple days is not unbearable. 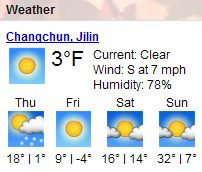 But let's not talk about the weather; that is not an exciting lede. Let's talk about trains. The NZWeek has a story: China's cold-proof trains to withstand sharp temperature changes.

So now, those of us who live in the "renowned imperial capital of Changchun" will be able to zoom to Harbin for the ice festival in mid-winter and zoom to the famous beach-side community of Dalian in mid-summer.


Posted by 李喆老师 Alexander Lee at 10:09 AM No comments:

Irresponsible reporting is not why I read the New York Times and Washington Post to the exclusion of other newspapers, but this article from the Times has its emphasis seriously misplaced: Oil Supply is Rising, but Demand Keeps Pace. It is only when you get down to about the sixth paragraph that you get the less than rosy picture that oil production and consumption will keep growing for years to come. Of course, the title of the piece (written by somebody else) does betray that fact so maybe I should cut the writer some slack for his Pollyanna lede.

"In 1969, the United States consumed a third of the oil used in the world, while China used less than 1 percent. Last year the United States’ share was less than 22 percent, while the Chinese accounted for 11 percent. The I.E.A. forecasts that by 2030, the American share could be less than the Chinese one." The patterns of consumption are changing and so are patterns of generation and production. The Oil Forecast chart that accompanies the article shows what is happening.

Also, of interest are the changes in electric capacity. In the United States, the chart below shows in stunning relief the nuclear booms (no pun intended) of the mid-1970s and mid-'80s. More obvious still, is a huge increase in natural gas plants since Enron went belly-up. If you look carefully, you all see that from the late '60s to the mid-'80s, we actually built a lot of oil-powered electric plants (brown).

The same data does not exist in the same form for China, but my conjecture is that coal is to China what natural gas has been to the United States. Forecasts from the EIA available at http://www.eia.gov/forecasts/ieo/electricity.cfm are the foundation for my supposition. Specifically, their international energy outlook says,


At present, China is installing approximately 900 megawatts of coal-fired capacity (equivalent to one large coal-fired power plant) per week. However, it also has been retiring old, inefficient plants to help slow the rate of increase in the nation's carbon intensity. From 2006 to 2010, China retired almost 71 gigawatts of coal-fired capacity, including 11 gigawatts in 2010, and it plans to retire an additional 8 gigawatts in 2011. [referencing IHS Global Insight, "Chinese Government Reportedly Meets National Target for Closing Old Coal-Fired Power Plants" (June 26, 2010), website www.ihsglobalinsight.com (subscription site)].

In other words, they are opening "modern" coal plants at the rate of about one gigawatt per week while taking old ones off line at a slightly higher clip. Despite looming siting and approval battles, nuclear production is at the bottom of what most expect to be an upward slope. That is to say, as China's consumption catches and eclipses America's, oil, coal and nuclear will be the foundation for this growth.


Posted by 李喆老师 Alexander Lee at 2:34 PM No comments:

Miss me? Want to play the Game of Go. I have found a website that teaches you how and allows you to play: gomatches.com. It will even allow you to improve your rank. This is the first video in a series which will explain the three fundamental rules and the major concepts (judgment and balance) of this ancient game.

I hope to get really good, but, truth be told, to be really good, you must start when you are really young. A month ago, my Chinese teacher took me to a special club for learning the Game of Go, or Weiqi. It was all aimed at children. Since ancient times, playing this game has been considered one of the primary arts here.

The Four Arts (四藝, siyi), or the Four Arts of the Chinese Scholar, were the four main accomplishments required of the Chinese scholar gentleman. They are qin (the guqin, a stringed instrument. 琴), qi (the strategy game of Go, 棋), shu ( Chinese calligraphy 書) and hua (Chinese painting 畫).

Posted by 李喆老师 Alexander Lee at 9:15 PM No comments: