Firewater & Smallpox Bar coming to a town near you...

If I really wanted to make light of past atrocities, I might open a Firewater & Smallpox Bar in Minneapolis or a Hitler Youth-themed kindergarten in Munich. Fortunately, some capitalists in China are already a few steps ahead of my dark and creative inner-marketing genius. David B. says that there are a proliferation of restaurants like the one we visited in every city in China.

On my day off, I called David B. and Andy. We wended our way down Longli Lu and across Remin Da Jie on to Yue Yang Jie where there is a restaurant that is supposed to bring one back to the throes of the Cultural Revolution (1966-1976). For those of you who did not pay attention in social studies or who never got exposed to this lovely chapter in Chinese history, I recommend the BBC's informative site. The waiters and waitresses here are dressed as Red Guards and the food is reasonably affordable. There are parrots and other talking birds for ambiance. On your way out, for three quai, you can choose between matchboxes with an image of Mao or, strangely, Chiang Kai-shek.

My friend Andy remarked that it felt like a Rainforest Cafe inside--kitschy and malapropos. Our experience was disrupted by two young waitresses arguing in loud voices behind us. I sort of wondered if this was for effect, but it seemed quite heated. 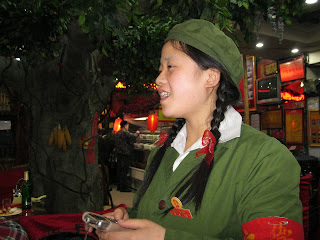 I ordered soup that appeared from the pictures in the menu to have blood sausage in it and then a second dish of bee pupae, which were the bee's knees. Really! "Battered and deep fried, the smallness  anything besides make you revolted. If the pupae and the heaviness of the frying process pretty much renders these things tasteless except for the saltiness and crispiness of the batter." (8 Bizarre Chinese Foods and How to Eat Them)

A few nights prior, Jason and "E" joined me at one of the top three (read, most expensive) eating establishments in the city. For 400+ RMB, which is about $70 US, I had goose leg accompanied by a colorful salad, preceded by sea cucumber soup. I passed up the opportunity to eat some of the other local specialties:


Many people come to sample the more exotic dishes that Changchun produces, which contain such ingredients as deer antler, bear's paw and snow toad, and the city specialty of deer's tail. If you are really not into these "exotic" foods, you can try potent Ginseng Chicken cooked with Maotai wine, a local dish that uses the famous Chinese liquor. (Changchun Restaurants)