...about a lucky mom who made the grave. The extravagance of this ceremony demonstrates the importance that the Chinese ascribe to their mothers, Tiger and otherwise. 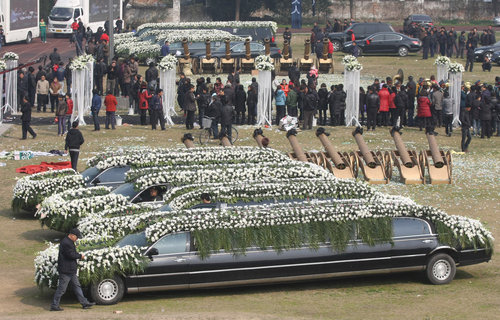 It also demonstrates that the divisions of have and have not are on full display in the major newspapers here. There seems to be a commonly held misunderstanding in America that the Chinese want to be perceived as a classless society. This has not been true probably ever and certainly not since the establishment of special economic zones, such as Shenzen.

"I read the news today, oh boy, 'bout an unlucky man who made the grave..."

Also in the news today was a sad story of a Chinese man gone berserk.  "A vengeful man was shot dead by police after he killed a pedestrian and injured 12 others in the street Thursday morning..." One of my students yesterday asked me if it was safe to live in Boston or Cambridge, where he wants to attend MIT or Harvard. I told him that if he stayed in the right neighborhoods and did not get involved with drugs, he should be all right. In fact, I was taken aback by his question which he claimed stemmed from having seen gun shops on a visit to "our fair city."


The Next Great Reform and Opening?

If you believe as I do that the moral arc of justice is long, but it bends towards justice then yesterdays news that a high-ranking party official has begun a microblog is a positive step. Many of my fellow ex-patriots scoffed and did not believe that participating was a safe or prudent move. They believe it will be heavily censored, but I am more optimistic. For sure, it is a place to share his perspective and the aspirational statements of poor farmers (one man's propaganda is another man's hopeful words):


"Recently, a woman of a minority ethnic group wrote to me, saying 'over the past year, we local residents have gradually felt the warmth of unity and love. We can hum songs when we get off work, buy vegetable, do cooking...because lots of happy things are taking place around us'."

Nevertheless, I take Zhang Chunxian at his word, "I hope, through my micro blog, that suggestions and proposals will be given to me on improving Xinjiang's development and Xinjiang people's livelihoods."

Official China and, more specifically, the NPC and CPPCC, know that they need to deal with internal strife if they want to avoid strife and if they want the world to take them seriously. Another blogging development was the announcement that Guangxi Zhuang autonomous region has requested its public security organs above county level to launch official microblogs, in an attempt to strengthen communication with the public.
Posted by 李喆老师 Alexander Lee at 8:29 AM