Sculpture as Mode of Peace and Understanding

The New York Times, which has two damning op-eds today that criticize China for increased crack-downs on dissidents, seems more interested in fanning the flames of discontent than in harmony. It is true that "harmonizing" can be employed as a cynical euphemism for the worst repression of free speech. It is also true that China is full of people, including government officials, who genuinely want it to be the first peaceful superpower in the world. We may want to provide it the breathing room to embrace its "better angels."

Maureen Dowd is fairly irresponsible in her critique of Bob Dylan's concert in Beijing, calling the People's Republic of China a "dictatorship." Nicholas Bequelin has instant credibility, because of his job title; however, his op-ed, which tries to read like a news piece at some points, also feeds over-simplified stereotypes of China. He speaks of "global values" repeatedly, which reeks of cultural imperialism and in whose pudding there is little proof. His job is to point fingers at nations and individuals who do not conform to one set of values.

Today, I am not going to attack these writers and The Old Grey Lady head-on, but want to offer one extraordinary example of international cooperation right here in my own city of Changchun. The following photos are mine from my second jaunt through the Changchun World Sculpture Park yesterday. I still have not come anywhere near to seeing the full complement of sculptures there. It is huge!

The first thing you see upon entering the gates (of heaven) is Rodin's The Thinker. (Many people do not know that this is part of a larger sculpture called The Gates of Hell.) It is an ironic choice. The park is very clearly a project of the same government being criticized by Dowd and Bequelin. Approved by the Ministry of Culture of China, Changchun Municipal People’s Government and the National Guiding Committee for Urban Sculpture Construction, it began to hold the annual Changchun International Sculpture Exhibition in 1997.


The Changchun World Sculpture Park is a truly international artistic endeavor, displaying works from 130 countries by nearly 300 artists. Its emphasis is on peaceful friendship between nations and alongside beautiful Chinese, English and Japanese works stand more unusual pieces representing Maya, Eskimo and Maori cultures. Displaying works in diverse mediums from bronze, stone and plaster to water and glass, the Park successfully showcases a broad spectrum of artistic styles.

The majority of the sculptures are dotted artfully around a landscaped 90 hectare area, encompassing a large arced lake over which fountains and waterfalls play, shaded by huge sail-like canvasses and intermittently accompanied by classical music. Paths and terraces guide visitors around the Park and using these as a guide one can take in most of the major works.

Visitors who do not wish to brave the great outdoors will be glad to know that a sculpture gallery has opened within the park. A modernist structure of concrete and glass, it houses works grouped by theme, and has also been used to host the yearly International Symposium and Exhibition on sculpture. 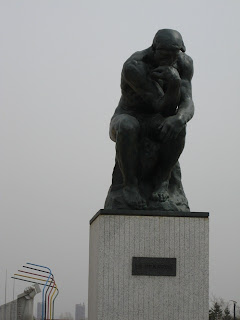 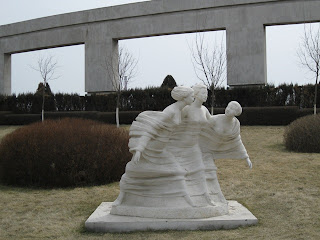 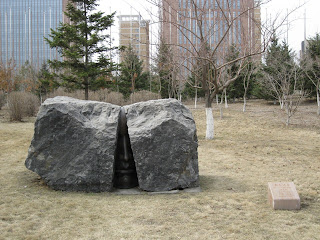 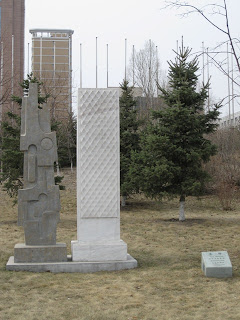 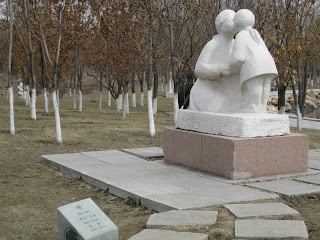 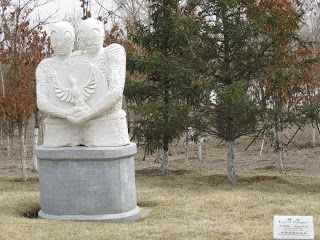 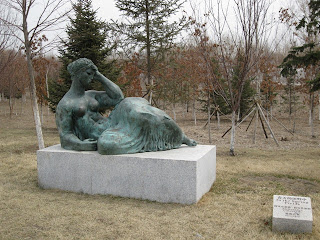 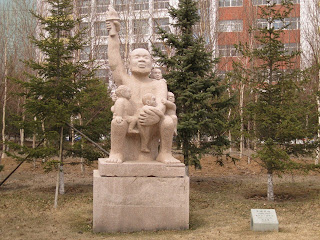 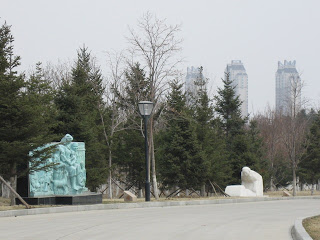 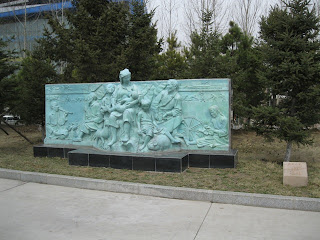 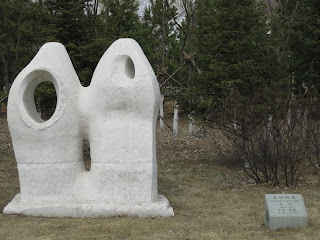 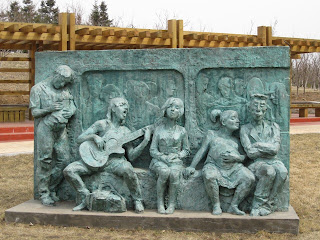 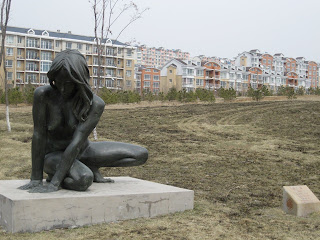 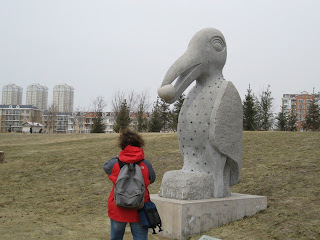 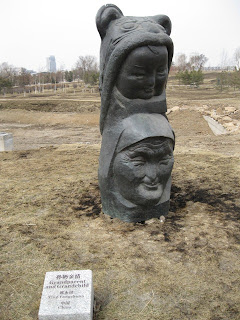 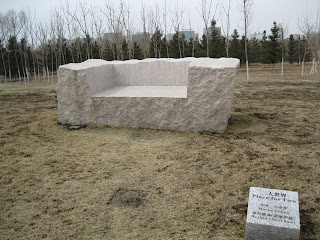 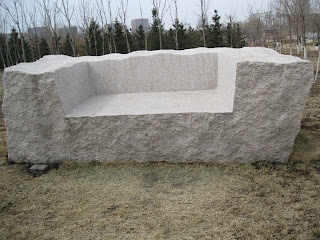 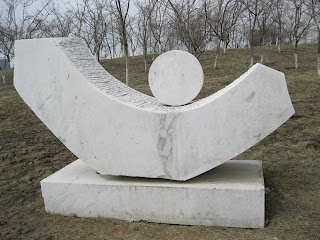 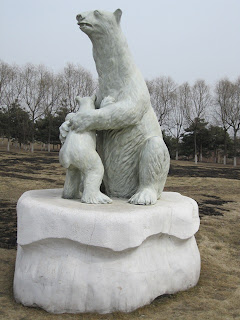 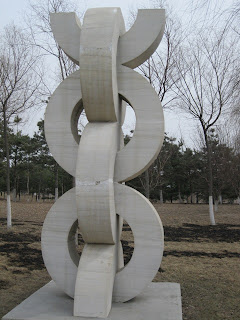 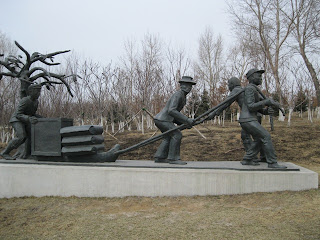 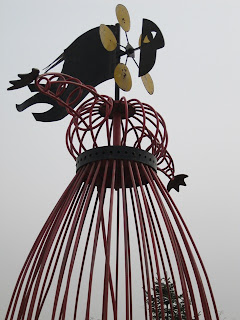 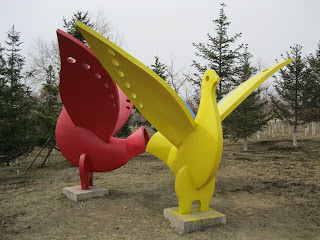 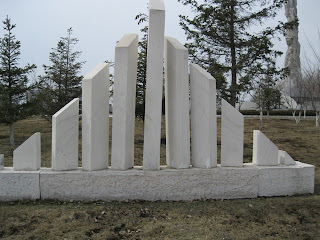 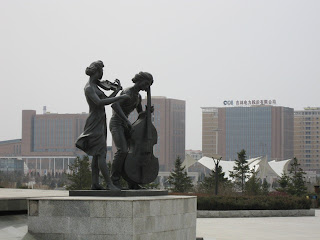 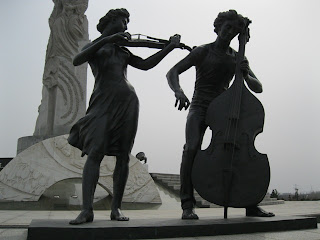 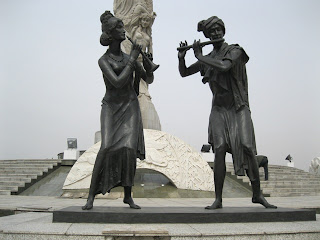 Here are some more examples of the beautiful work on display there. For even more, see the photos from China.org.cn, a website offering broad access to up-to-date news about China, with searchable texts of government position papers and a wealth of basic information about Chinese history, politics, economics and culture. The authorized government portal site to China, China.org.cn is published under the auspices of the State Council Information Office and the China International Publishing Group (CIPG) in Beijing.
Posted by 李喆老师 Alexander Lee at 9:34 AM