It was 4:59 when I rolled over and the alarm was set to go off in a minute. I was bunked above a Chinese-American who lived somewhere in San Francisco, but not in China Town. Across from me on the top bunk in this hostel was a Guatemalan. "Are there a lot of Chinese people in Guatemala?" I asked, displaying my ignorance.

"Yes...and Koreans. So many Koreans now," he tells me, but that was last night and now it is time to get up and do something I am not sure I am allowed to do so I put the book, which I am not sure I am allowed to be reading, into my backpack and close the locker. I check out of the hostel, which involves waking the man on the couch in the lobby. He, in turn, wakes somebody else and I am awarded my fifty yuan security deposit. The room itself was only fifty yuan for this one night--a steal for Beijing. The man at the desk says, with his hands more than his mouth, "Go out the door and turn right." I do this, which means that I am headed in the wrong direction.

Eventually, at about 5:45, I get my bearings and I am one subway stop (di tie zhan) from where I need to be, a station called Xuanwumen. I decide to keeping walking. I am going to Mass.  This, I am sure, is permissible. The Lonely Planet (damn, I hope they are right!) announces a Latin Mass at 6 AM daily. Where I am cloudy is whether there will be Chinese people there or all foreigners. Am I allowed to worship in the same place as Chinese Catholics? Are these really Catholics? For my part, I am a tourist--a voyeur of the praying class, attending something greater than a charade and something less than a consecrated Mass. I arrive on time. I decide not to talk to anybody. Then, if somebody decides that I am not supposed to be there, I can say that I never had any fellowship with my Chinese brethren.

I sit in the pew in the back, which allows me a good view of the altar and of the elderly woman who comes in close to 6:30 and douses her hair with the holy water in the font by the door. She fixes her hair and waddles down the side aisle, vaguely conscious that she is being watched. There is a white cupboard in the back that looks like a top-loading freezer. It, too, is full of holy water and in the midst of the Mass another woman comes back to fill her bottle. She looks at me as if to say, "What are you doing here and why I are you looking at me?"

They are already chanting in Latin when I arrive. I am the only white person. There is a woman also in the back pews who is as old as Mary. She never gets off her knees and never opens her eyes. Everybody else rhythmically chants and sits, stands, bows, etc. according to the order of the Mass. I am unfamiliar so that even when I go to receive the Eucharist, I don't know what to mumble except, "Amen." There is no wine--only a wafer that fills me with the Holy Spirit. I sit down and wait for the other communicants to eat this bread, drink this blood. Another Mass (in Chinese) is set to commence at 7:15PM. People are coming in and people are going out. Fairly certain that this whole alien experience is through, because the priest and deacon have momentarily slipped out of view, I myself slip out the door and into the courtyard.

God is there to meet me. I have taken a photograph of God once before--in 1996, while photographing a rainbow and milli-seconds before I was hit by lightning. The negative came back and there was a brown streak in the air. Today She is here in her fullness as the moon, shining through some tree branches, above the cross. You can't tell that she is there from this photograph, which I took with my shitty new Nikon. Sometimes you just know. He doesn't tell me to run for President of the United States. He does not bellow at me, "Repent, sinner." No, She just watches quietly and there is a peace that settles on Xuanwumen. 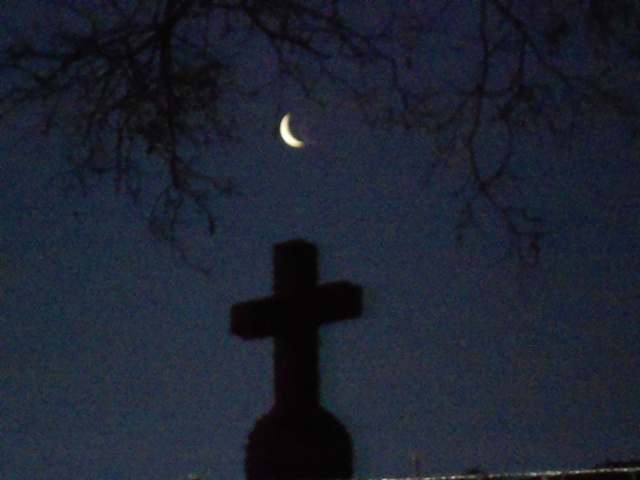 I left my gloves on the pew, which I don't realize until I am on the subway to the Military Museum. When I had announced my plan to my friend of Latin Mass at 6 AM ("insane!") and then a visit to the Military Museum, he reacted sarcastically, "Onward Christian Soldiers." He then needled, "The Reformation passed you by, didn't it?" It was not really a question. We re-visit how Thomas More burned people at the stake and Isabella y Ferdinand carried out the Inquisition. I say that I admire Catherine of Aragon and sometimes the apple does fall far from the tree.

Is it really any wonder that there are so many atheists when you contemplate the atrocities that have been done in the name of the Father and the Holy Ghost?

"Běijīng’s South Cathedral was built on the site of the house of Jesuit missionary Matteo Ricci, who brought Catholicism to China. Since being completed in 1703, the church has been destroyed three times, including being burnt down in 1775, and endured a trashing by anti-Christian forces during the Boxer Rebellion in 1900." Read more: http://www.lonelyplanet.com/china/beijing/sights/religious-spiritual/south-cathedral#ixzz1mtshPyAR