A Smattering of Chinese Experiences


Yesterday, I had coffee with an International Baccalaureate math teacher who works at the same school as I. She is in a sling because she hurt her harm. I asked her if her students ever teased her and she looked shocked. "No," she said. "They offer to carry my books and are very respectful."


Hearing this, I pulled a note from my pocket that I had received at the end of class on Wednesday. I arrived for the Wednesday class a few minutes early to locate the classroom because it was my first time teaching this particular class. Once in the courtyard of the school, I asked a girl whether Class 28 was on the first floor of Building A or the third floor of Building B. Admitting that she was not really sure, she sent me in the wrong direction which had the only consequence of requiring me to walk a little farther--soemthing this almost 40 year-old body does not resent.


At the end of the class, the girl presented me with a really good piece of candy and a note that read as follows, "Sorry for giving you the wrong direction! I'm a student of Grade 3 [equivalent to a high school senior in America] and I must have remembered the class arrangement of grade 1 wrong. Wish that I didn't cause that much trouble. (I told the students to find you the moment I found I was wrong, did they find you in time?) My apology again~ Here's a "map". {MAP} Wish that may be of help. Have a nice day. [Smiley face] Sincerely, Amy." 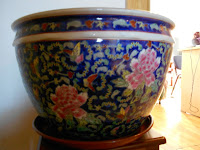 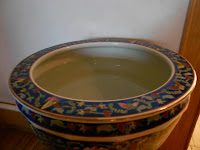 I have five new pets. Niccolo and Dante are the bottom-feeders; Sacco & Vanzetti are the pair of bright red fish; Sophia is the beautiful, elegant black one with a fan-tail; and, finally, there is Ursula, who is quite gorgeous in her own right. You will be hearing a lot more about the adventures of this new Italian naval force in the coming days. They were purchased at a huge market that has countless tea shops in the basement and hundreds of exotic flowers for sale on the second floor. The first floor is an assortment of fish-tanks, fishbowls, fish gear, and fish that would blow the average mind.

You can see this fish bowl that I bought which is 26 cm high and 42 cm in diameter. It was made in a famous place and fired dozens of times as they added color after color. More details coming in a subsequent post.

There was a man who lived in Changchun for a while who liked to say all sorts of dreadful things about the Chinese. One of his favorite expressions was, "The Chinese really like to dig." With this generalization, I might be forced to agree if only because of the large amount of digging that I have witnessed.

You may remember some time back that they were installing new pipes around my building and I watched in amazement as small, smiling men hurled shovels full of dirt from six foot deep trenches that stretched for hundreds of feet.

Well, the late winter snow--like New England, all of our snow seems to be falling right now--has given me another occasion to look on with amazement. Most of the snow removal in this city of four million people happens by hand. Specifically, it happens at the hands of the three million or so "countryside" people or peasants who are issued bright orange vests and a shovel. These happy crews involved in meaningful group work make their way methodically down the roads and alleys of this great city. 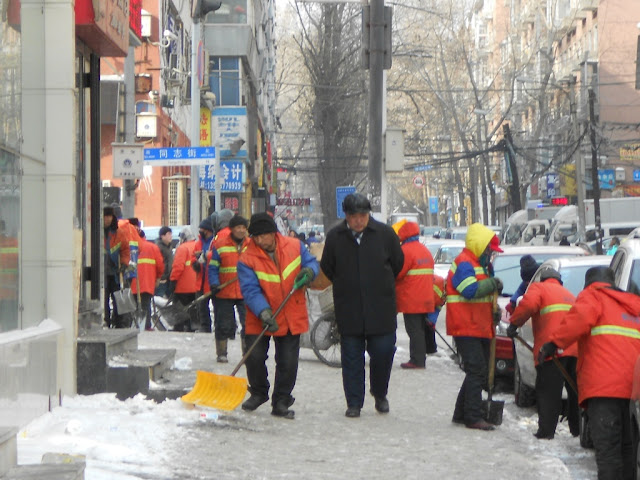 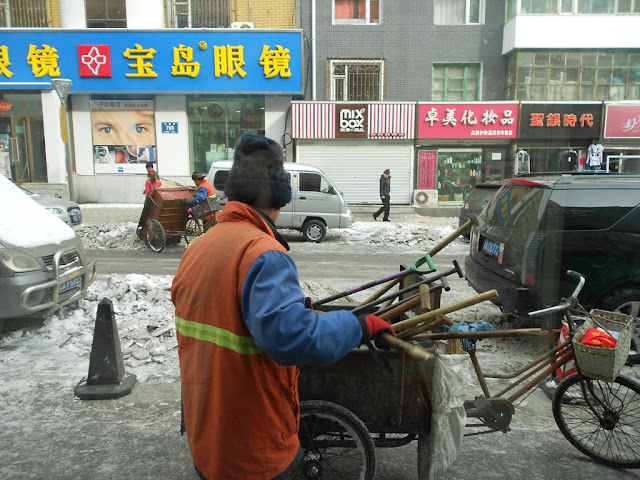 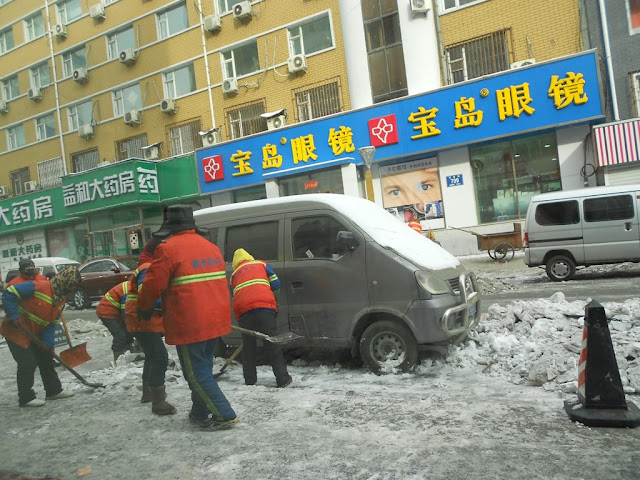 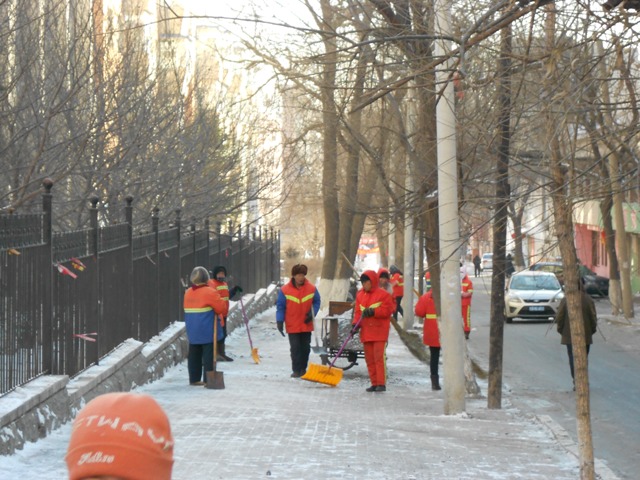 Ping-pong and badminton are popular pastimes here. Yesterday, I went with two Chinese friends and a fellow American to play badminton for an hour and a half. It was great fun and I am none the worse for wear today. I snapped a shot of the ping-pong hall at Jilin University. There were young and old. One young kid with a coach was particularly fun to watch. When he was done, there was a whole ritual for the care and storage of his racket. Two old men rallied at a pace that made me tired to watch. They were practicing the same move over and over again. You could see the strain in their hunched shoulders when finally the ball would go bouncing off in some unintended direction. 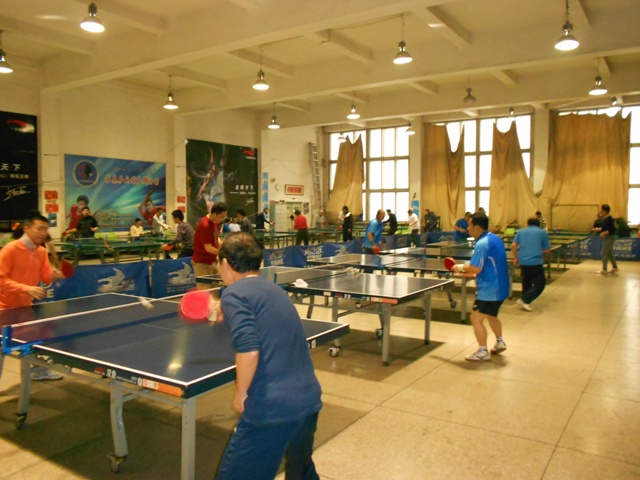 Last week, I went to a huge market and was particularly interested in the food offered at one particular stall. I will not attempt to name the delicacies here for fear that would be indelicate and upset the reader, but all of it is internal and some of it might just be tendons. 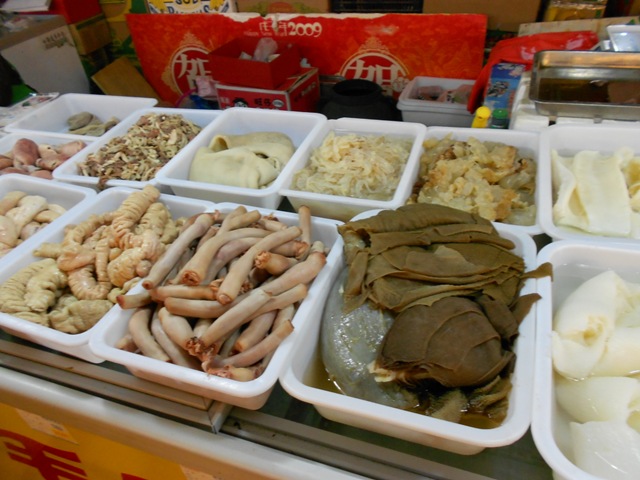 In contrast, some of the arrays of orchids for sale were stunningly beautiful. 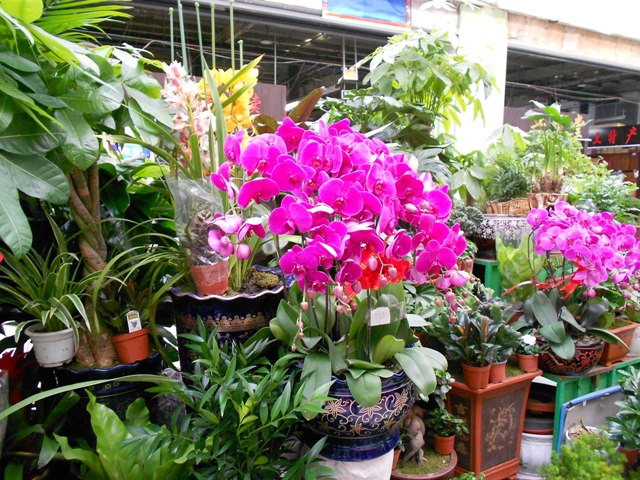 There is lots of great street food. There are at least five or six of "nut stands" in my school's neighborhood. Chestnuts and pine-nuts, walnuts and almonds, as well as countless exotic nuts are for sale. Steam rises from the roasted chestnuts, which, in winter, are kept beneath a red velvet cloth so they retain their heat and moisture. In this case, the blanket looks like it was supplied by Luis Vuitton.

This waffle-like honeycomb shaped street food (below) has contributed to my expanding waistline. Last night, more than one person commented that I looked like I was getting bigger. I am afraid so. Time to avoid the wheat again?

Baked sweet potato (or, in direct Chinese translation, "ground melon") is a healthy snack. This man sits in the cold selling them by the bag full on Guilin Lu. Beside him, a woman hocks ribbons for girls' hair.

Posted by 李喆老师 Alexander Lee at 10:16 AM