I spent the whole day yesterday in my flat, partly to avoid the weather. I slept and watched a couple amazing movies--Part 6 of BBC's Wild China (final episode, sadly) and The Great Debaters. I studied a little and worked on recruiting and some work stuff.

I remember seeing James Farmer, Jr., when I was a student. He is the protagonist of The Great Debaters. This film, typically well-acted by Denzels Washington and Whitaker, made me weep. I would like to show portions of it to my class that is learning how to argue (aka critical thinking). I also cleaned house, did laundry (even the flannel bedsheets, mom and Theresa-Shannon!), and had a plumber come by to fix a problem with my plumbing (an endless saga in this apartment).

My friend and I cooked the most amazing dinner of fish, spicy duck neck and muer (wooden ear fungus) and potatoes with peppers. 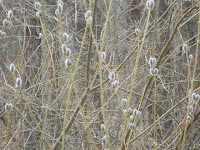 This morning I woke and went to Jingyuetan, Asia's largest urban forest park, which is right here in Changchun. I went with my friend C. Chen and two of her male, childhood friends. One of them is a professor of trombone and composer, who will travel to LA in a few months for some philharmonic event. We hiked and I even jogged. The weather was delightful. After the high winds of yesterday, which brought with them dust and fine sand from the Gobi Desert, the calm, warm (64 degrees Farenheit) weather of this Saturday was a welcome relief. I saw some pussy-willows on a well-drained hillside and chuckled, as I remembered George Bush Sr.'s bumbling Interior Secretary, Manuel Lujan, and his infamous blunder, "I take the position that there are certain kinds of vegetation that are common in wetlands -- you know, what do you call them? Pussy willows, or whatever the name is . . . (He probably means cattails.) That's one way you can tell, and then, if it's wet." [In 1999, when efforts to protect the endangered Mount Graham red squirrel held up construction of an Arizona observatory, Lujan confessed to reporters that he could not see what the fuss was about: "Nobody's told me the difference between a red squirrel, a black one or a brown one."] We did not see any squirrels.

After an amazing lunch at a restaurant where the owner treated us to a yang qin concert and some 15 year-old baijiu (Chinese liquor) that tasted and looked like port, as well as a tea ceremony by his wife at an authentic tea table and some top-shelf pu'er, I headed back home for a two hour massage, where they convinced me that scraping and cupping would be good for me. What do you think? 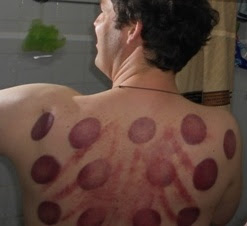 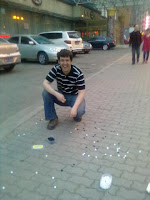 After the massage, I met my friend Sun Lu and we learned a bit more about how to play weichi from a couple of guys at the fancy tea-house in my neighborhood. We drank tea for a while first and tried to teach ourselves, but it was happenstance that I took a look on the front-porch to satisfy my curiosity and found several clusters of older men playing the game. After watching one game, we had a nice dinner of bao zi and lamb with onions. As Lu got my weichi set from her backpack, both boxes opened and over a hundred little black and white stones spilled out on the sidewalk. We picked them all up, laughing the whole time, and now I am home lining up interviews with teacher candidates for tomorrow and beyond.

After a very lousy week, where I have been plowed under with work, 2AM phone calls, conflict, and a head cold, this was what I needed!
Posted by 李喆老师 Alexander Lee at 8:53 PM