The Dragon Boat Festival (or Duan Wu Festival in Chinese) is on the fifth day of the fifth lunar month. It is a day to remember the great poet Qu Yuan, who was a loyal official in the State of Chu in ancient China and deeply loved by his people.

Qu Yuan drowned himself on the fifth day of the fifth lunar month in 277 BC due to being unable to save his country. The local folk did what they could to search for him in the river, meanwhile they dropped dumplings of glutinous rice wrapped in bamboo or reed leaves into the river in order to prevent the fishes from eating Qu Yuan's body. Since that time, it has been customary on this day to eat zongzi (glutinous rice wrapped in bamboo or reed leaves) as a memorial to the patriotic poet.

Nowadays, zongzi is not only made for the Dragon Boat Festival. It is available at any time of the year, with a wide styles and varieties of dumplings. The main ingredient of zongzi is the glutinous rice, and then the bamboo or reed leaves -- the wrapping that makes zongzi taste distinct. The usual recipes include dates, sweetened red bean paste, meat, chestnuts, lotus seeds, dates, and yolk of egg. (See http://www1.chinaculture.org/library/2008-01/08/content_29449.htm)

The meat ones are my favorite, but are more common in the South. Here, dates are the most common filling and I am not wild about them. The other tradition is to wear five-color string bracelets. You can learn more about the traditions of Dragon Boat Festival at http://www.chinaculture.org/focus/focus/2010duanwu/2010-06/12/content_382549.htm. 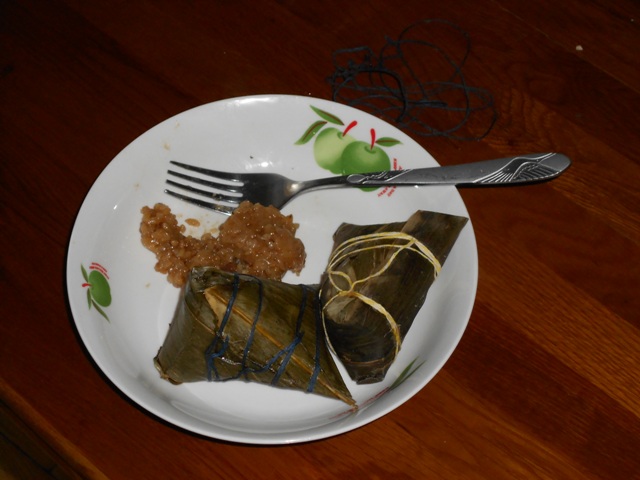 A week or so ago, I finally purchased (for 100RMB) a rack for drying my maobi, or calligraphy brushes. This desk is dedicated to my calligraphy now. 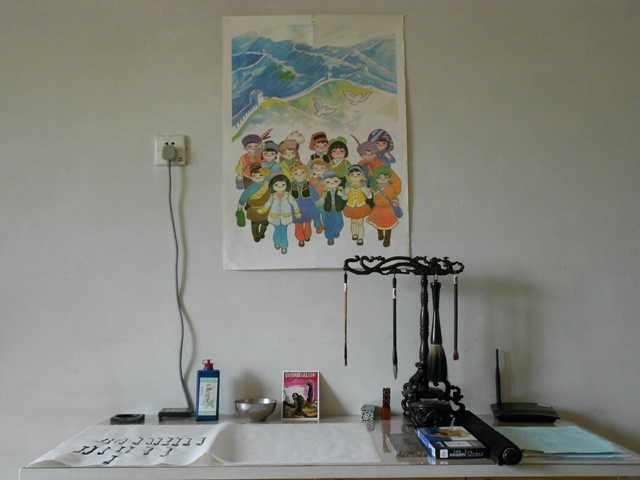 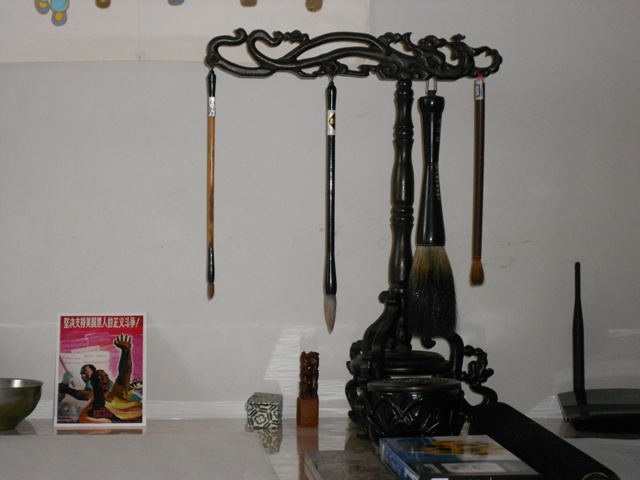 More Stories from the Tea Market

Today, for the festival, I slept late and then my girlfriend and I went for a late lunch at my favorite restaurant, which serves mushroom hot pot. Then, we walked to Qing Yi Fang, the tea market that also sells plants and goldfish. We had a wonderful time and I was oblivious that they were supposed to close, but when we emerged, the hallway lights were out and most of the other stores had pulled down their shutters. I learned a lot. For instance, I learned about Ru Kiln which, during the Song Dynasty, produced pieces of porcelain for the emperor. The Emperor Huizon would "select 36 pieces of porcelain as his imperial products, and the remaining porcelain, whether good or bad, would be crashed to pieces without exception, with all such pieces buried deep in the earth, and might not be carried down by folks." (See www.gzhengfu.com)

The following entry from the Encyclopedia Britannica tells more of the story.

No more than 60 intact pieces from the kiln were known before the discovery in 1986 of the original kiln site, which is in the village of Qingliangsi, in Baofeng county, Henan province. This site has yielded at least 37 more examples (22 of which are intact). The undecorated bluish or greenish gray glaze of Ru wares was cloudy and opaque, often with a slight lavender tinge and a fine, irregular network of cracks. The glaze typically covered a gray stoneware body that had a simple, elegant shape. (Encyclopedia Britannica)

I also learned about Lapsong Souchang Black Tea, or BOHEA (recall an from earlier post that what we call black tea in the West is called red tea in the East). This tea was popular in the 1600s and an ad from 1705 in Edinburgh purports to have sought 30 shillings for a single pound of the stuff. In the 1870s, production was quite high and then it trailed off to nothing by 1949. The company trying to sell me this kind of tea is certified organic in Japan and by the Germans and Americans. They have 120 staff who help to process 900 tons per annum. Of the 6000 mu in their plantation, 5000 are certified organic and the additional 1000 are under transition.

6,000 mu? Chinese still use many traditional measurements for distance, acreage and weight.