Father Verbiest and the Early Automobile

This post is dedicated to my amazing student known as Todd, who has memorized one of John F. Kennedy's speeches in a recognizable Massachusetts' accent! Todd wants to own his own car manufacturing company some day and has numerous sketches of models that he would like to build. For months, he has been reading David Macaulay's The Way Things Work with me and we also have long conversations about Allied and Axis generals, military uniforms and equipment, and geography. He is thirteen and nearly as tall as his teacher!

Father Ferdinand Verbiest (9 October 1623 – 28 January 1688) was a Flemish Jesuit missionary in China during the Qing Dynasty. He was born in Pittem near Tielt in Flanders (present-day Belgium). He was an accomplished mathematician and astronomer and proved to the court of the Kangxi Emperor that European astronomy was more accurate than Chinese astronomy. He then made some important adjustments to the Chinese calendar and was subsequently asked to rebuild and re-equip the Beijing Ancient Observatory, being given the role of Head of the Mathematical Board and Director of the Observatory. 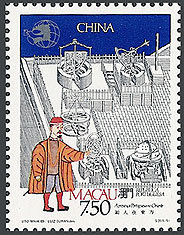 If you have been paying attention to this blog for a while, you know that I have written about another Jesuit, Fr. Matteo Ricci of Maceratta in the Papal States (current day Italy) and the subsequent controversy about "Chinese Rites," which still rears its head in our current age. The image above pictures Verbiest, Ricci, and another Jesuit priest, Adam Schaal of Cologne, Germany. Below them are two prominent Chinese Catholics. The one on the left, Paul Siu, was also of great importance in the Qing Dynasty and is considered a pillar of the early Church in the Middle Kingdom.

You may also recall that I wrote about the Kangxi Emperor, who issued a statement basically condemning and banishing Christians as troublemakers and simpletons unable to grasp the intricacies of this five-thousand year-old culture. There are still people here today who feel that we can never understand the Chinese mind or culture. Despite his disgust with the Dominicans and Franciscans who rejected ancient Confucian practices of ancestor worship, the Kangxi Emperor had in Verbiest a valued adviser. Verbiest was the only Westerner in Chinese history to ever receive the honor of a posthumous name from the Emperor.

Beside his work in astronomy, Verbiest also experimented with steam. Around 1672 he designed – as a toy for the Chinese Emperor – a steam-propelled trolley which was, quite possibly, the first working steam-powered vehicle ('auto-mobile'). Verbiest describes it in his work Astronomia Europea. As it was only 65 cm long, and therefore effectively a scale model, not designed to carry human passengers, nor a driver, it is not strictly accurate to call it a 'car'.

Steam was generated in a ball-shaped boiler, emerging through a pipe at the top, from where it was directed at a simple, open 'steam turbine' (rather like a water wheel) that drove the rear wheels.

It is not known if Verbiest's model was ever built at the time, although he had access to China's finest metal-working craftsmen who were constructing precision astronomical instruments for him.

The Catholic Encyclopedia entry on Verbiest is full of the fascinating trials and tribulations that Verbiest experienced whilst in China. For further reading, you may want to see their description of his life and time.