We had a lovely trip to Beijing, though the housing situation was less than ideal. At first, the four of us were in one hostel, but Deborah and I decided to move to a (cheaper) hotel where the room promised to be a little warmer and the smell of sewage did not permeate the air. [The overall air quality of Beijing during our visit was tolerable. We really lucked out, in that respect!] Our two friends continued to brave it at The Three-legged Frog, where the people were very nice and the service was good. It was, in fact, a fairly charming place and would probably be wonderful in the warmer months. 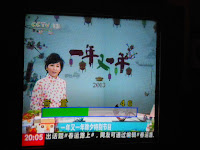 We arrived in Beijing on the morning of February 9th. The TV show that the whole country tunes into begins around 8:30PM and goes well past midnight. We shivered in our room after a nice day of wandering about Tian'anmen Square and the Quianmen area.

The pictures below show Deborah and I in front of the Great Hall of the People, in front of Tian'anmen with Mao's mug betwixt us, in front of the first movie theater in China, and finally in front of the original Quanjude Peking Duck restaurant. We would eat there later that evening and one of our number won four boxes of monogrammed chopsticks by participating in a dumpling stuffing activity. 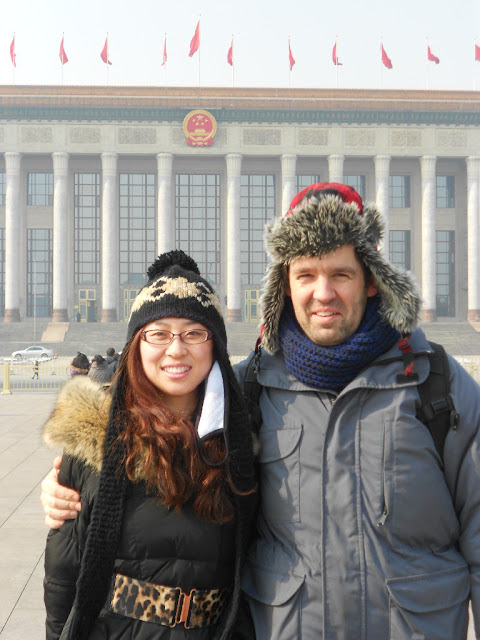 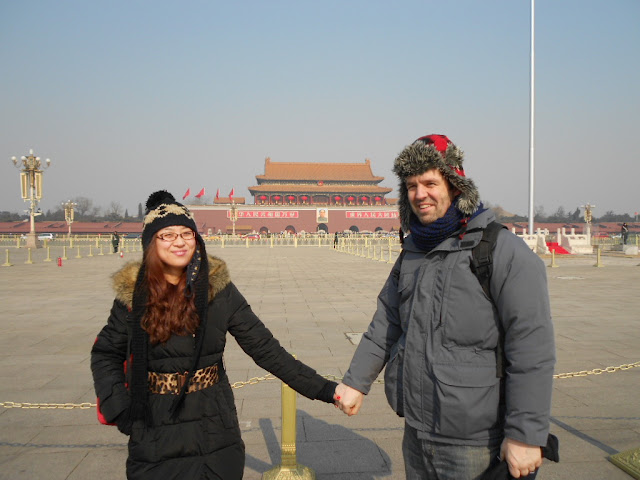 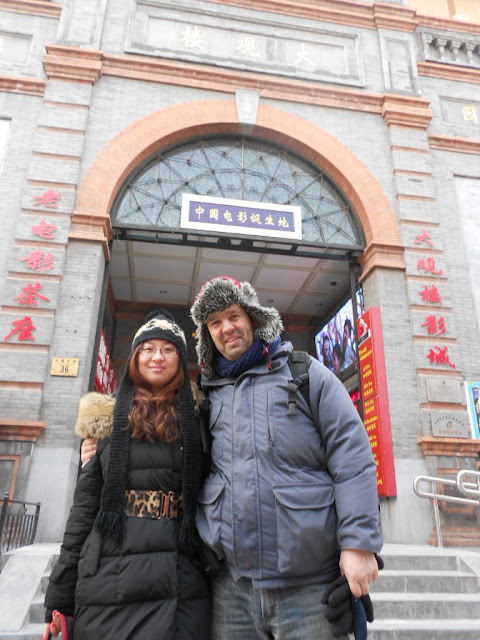 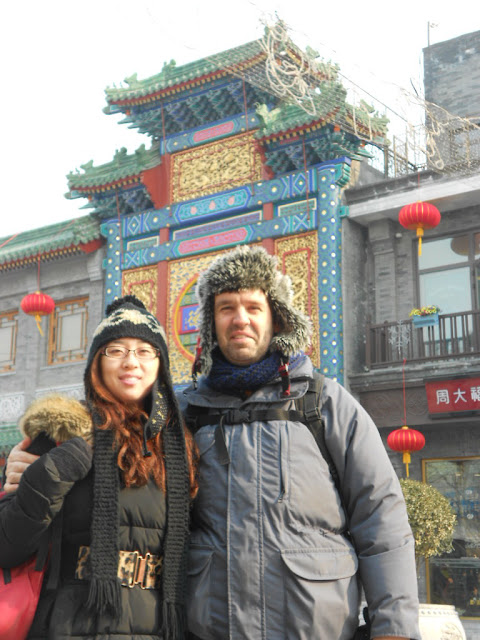 On the first day of the Chinese New Year (Sunday, February 10),we went to the Forbidden City. You could spend a year there and not see it all. I did not take many pictures, but will share one of great beauty, one of great symbolism and one of great humor: 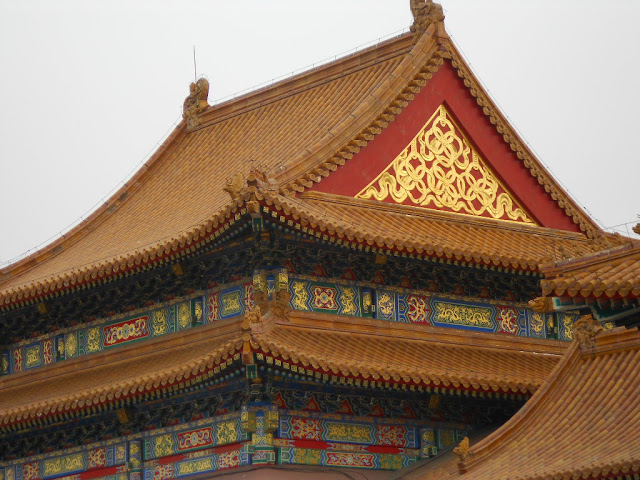 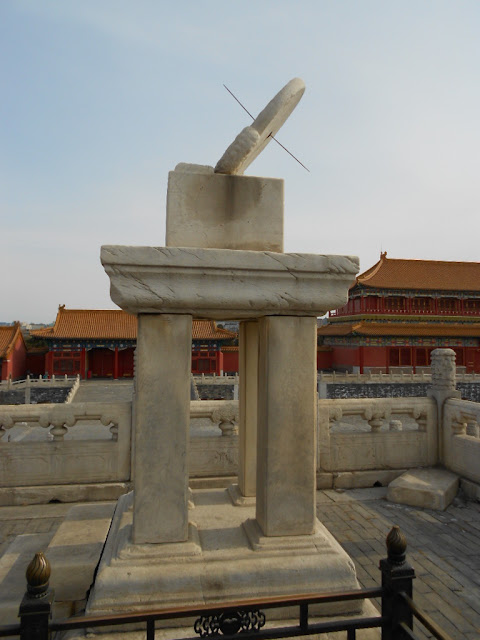 On the last full day there, we also went for a swim in the WaterCube. There are no pictures of that (thankfully), but here we are standing in front of the Bird's Nest, designed by Ai Weiwei for the 2008 Olympic Games. 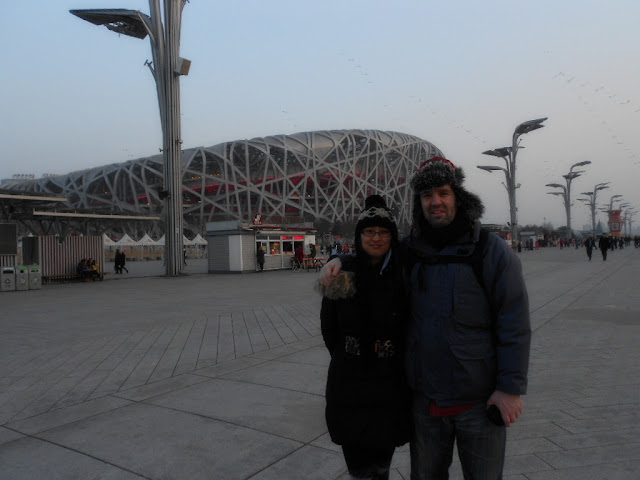 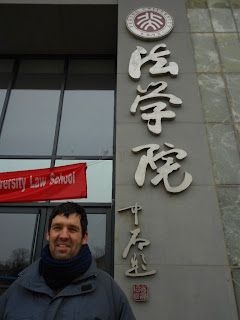 Deborah and I were both impressed by the large number of bicycles. "It's like the olden days," she remarked.

The best part of both campuses were the lakes. I had seen the one at Peking University on my summer trip, but the skating scene at Tsinghua University was positively out of Currier & Ives. The red litter comes from the abundance of fireworks lit off at this time of year for celebration of the new year (look for a post soon on the Year of the Snake). 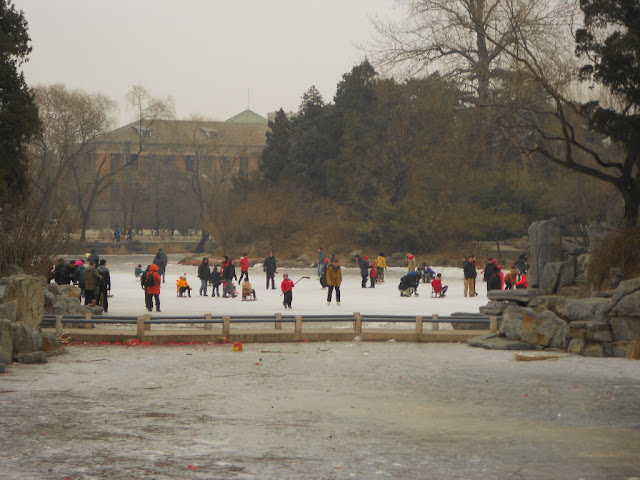 We saw an amazing show of Chinese acrobatics called Legend of Jinsha. 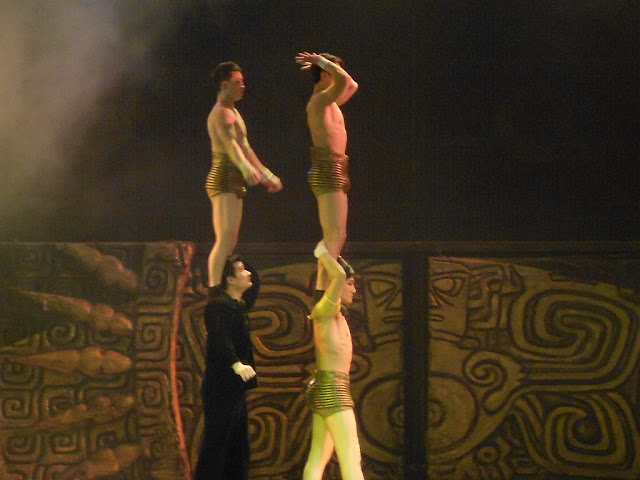 The most impressive segment included five motorcyclists barreling around in a steel ball. 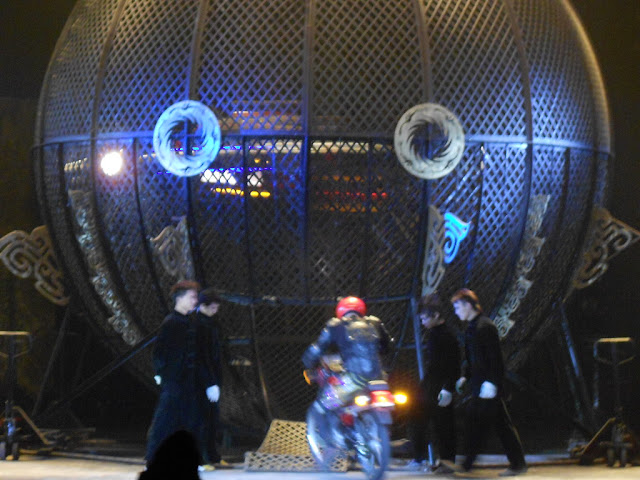 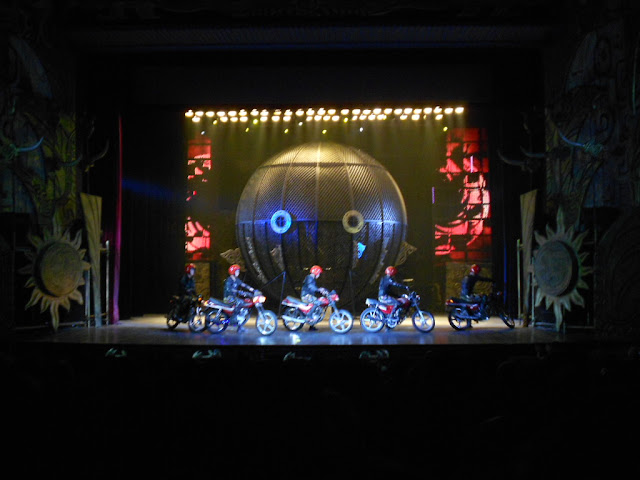 When we arrived on the 9th, Qianmen was dead. I felt sheepish that so many things were closed, but the days ahead saw an explosion of people and we estimated that there were 500,000 people in Tian'anmen on the 13th of February. With security such as it is in the square, I could not get enough height to really show the magnitude of humanity waiting in various queues.