A Chronicle of The Maiden America Tour

The trip that Deborah and I made to America was the best and longest vacation that I remember since grade school. We were repeatedly permitted to sleep-in by generous friends and family. Deborah commented more than once that she was amazed at her own ability to sleep in every manner of bed from the inflatable mattress to the futon with a mountain in the middle to the too-soft bed of fluff to the couch in the middle of a NYC 21st floor apartment's living room.

I took a few pictures on Deborah's camera, but I wanted to see what she noticed. Reviewing the more than 1,000 photos that she took, I found that she has a fetish for American trash cans and recycling bins. She also took a picture of each new brand of petrol that we saw so there are a huge number of gas stations in her collection. 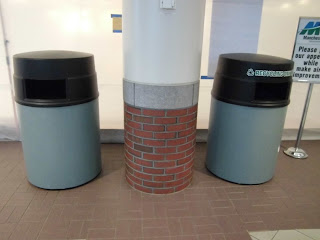 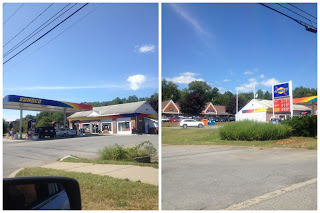 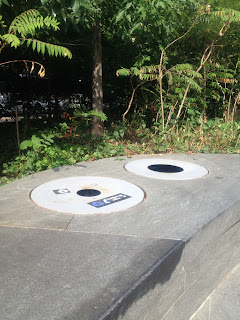 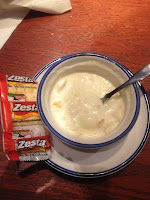 Finally, there are a lot of shots of plates loaded to the gills with food. I made sure she had a quarter-pounder at a drive-thru MacDonalds, a heaping plate of chicken at Cracker Barrel, a #4 Breakfast Special at Dunkin' Donuts, and a lot of healthier, traditional fare, such as soft-shell crabs in Baltimore and schrod with clam chowder and a side of baked beans as her first meal in Boston's Durgin Park. I woke up and made tomato sauce with Tom Cornell at the Peter Maurin Farm (A Catholic Worker community) and, outside of lobster, this huge pot of his famous concoction was the most-discussed and favorite culinary delight of the trip.

Deborah and I helped harvest some early radishes at the Peter Maurin Farm. The dogs came with us for company. 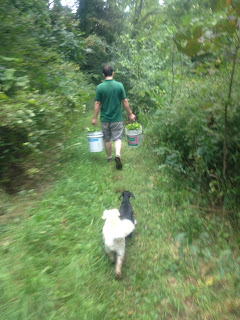 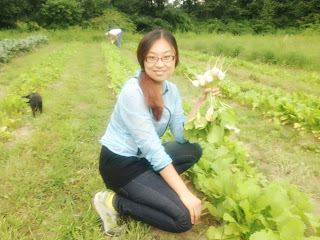 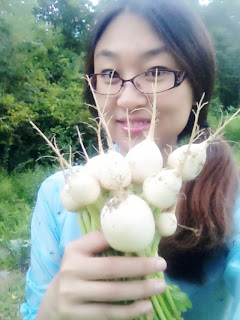 We had lobsters and clams in Maine at a clambake (first for me, too), Red Lobster in Times Square (another first), and lobster salad with blueberry muffins in Cohasset. 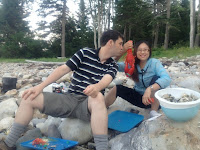 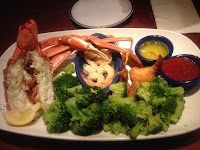 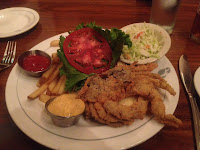 She loved our pineapple juice and seemed to enjoy her ham 'n cheese croissant, as well. She had Mexican with me at Dos Amigos (Concord, NH), Hermanos (Concord, NH), and Lauriol Plaza (DC). We had oysters from PEI and I had a Bloody Mary at Old Ebbitt Grille, Washington's oldest saloon. 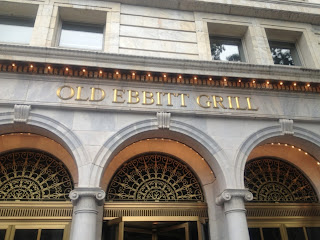 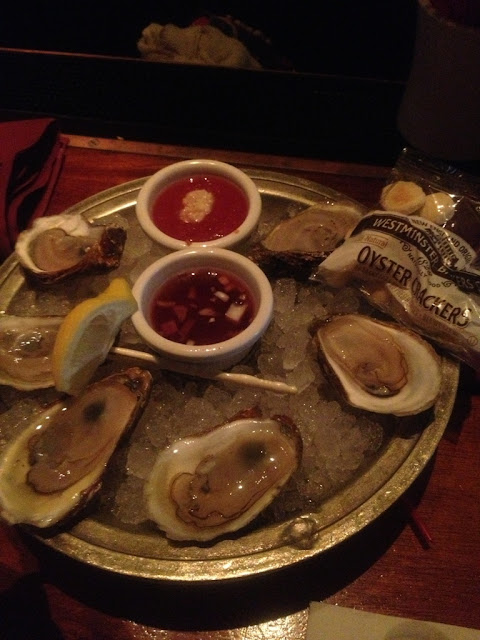 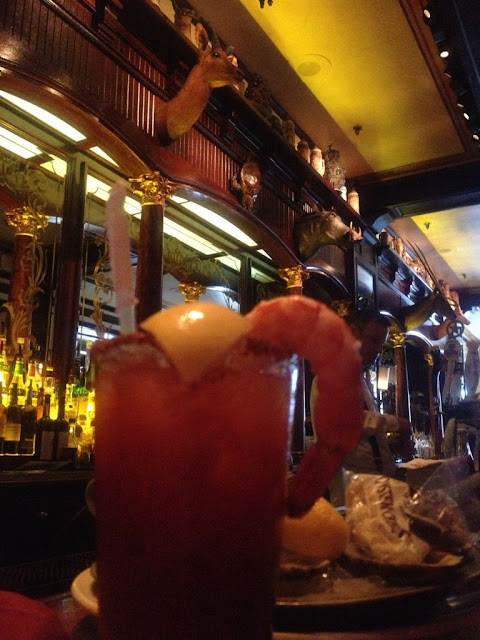 There were several other firsts for me, as well. For instance, we skipped Philadelphia, originally on the itinerary, and went instead to Washington Crossing, PA, en route to friends in Doylestown. It was exhilarating to see where a band of Marblehead fishermen helped sneak the Continental Army across the river on Christmas, to attack the arrogant, sleeping Hessians at Trenton.

Finished with lunch in Wellesley and not due for dinner in Lincoln, MA, until 6:15, we also went to the Minute Man National Park on our last full day in America. I had never been there and was shocked to learn that it was just a couple miles up Bedford Road from my uncle's house.

Uncharacteristically, I made only a few driving mistakes, the biggest being that we crossed the George Washington Bridge instead of the Tappan Zee, because I lost heart at the turn-off for Route 80 East and so headed back to NYC instead of continuing on I-287.

I learned a lesson on the rental car. Let somebody insured rent it and then have you added as the second driver. Quoted a mere $555 for 17 days, it ended up after insurance and gas being about $100 a day! We wanted to pick it up on Monday morning instead of Sunday night, but that was going to raise the cost by a lot...which makes no sense to me. We wanted to turn it in at Logan Airport instead of Manchester, NH, but that was going to raise the cost by $600 so we took a $70 full-sized van with only four passengers in it to Logan from MHT. It was worth it environmentally and economically to rent their EZPass. We traveled in style, listening to Secretary John Kerry preach war on NPR, operating cruise control from buttons on the steering wheel, and incessantly forgetting the keys in our press-the-button-to-start Nissan. 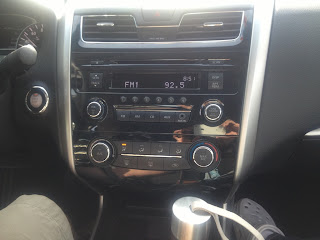 We are incredibly grateful to all of the people who put us up, especially my parents, Arnie Arnesen & Marty Capodice, The Peter Maurin Farm, and Randi Cecchine/Michiele, who all took us for multiple nights. This was an incredible introduction to America for a Chinese woman who has never traveled outside of China and a great chance to see so many wonderful people for me. I think Deborah met so many people that you might be referred to hereinafter as "the person with the crazy dog" or "the one with the cute child."

Deborah got to see many iconic things and to go half way up the Statue of Liberty. I took this picture of the pulpit at St. Patrick's Cathedral, which is undergoing a glorious renovation. 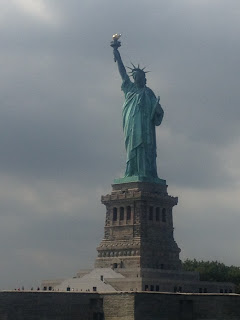 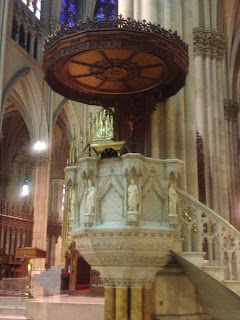 We saw the George Washington Bridge and the Lincoln Memorial, as well as the National Museum of the American Indian in both New York and DC. Here is a sampling of the places we saw. The sun on the scaffolding surrounding the Washington Monument was dreamy. 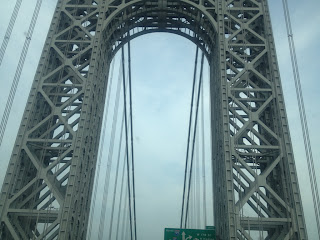 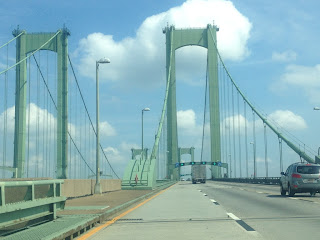 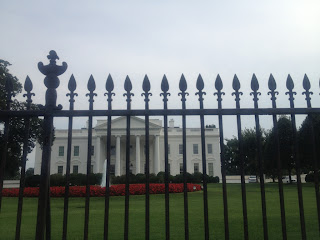 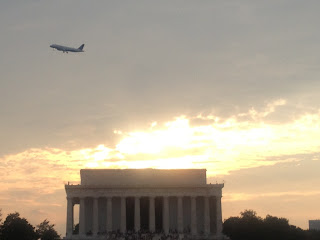 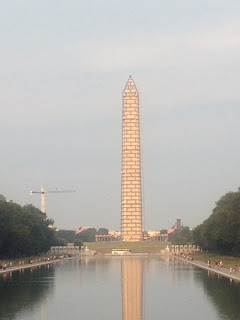 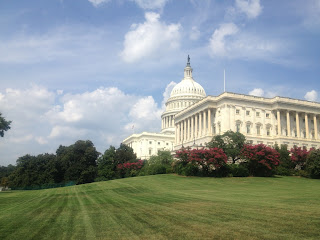 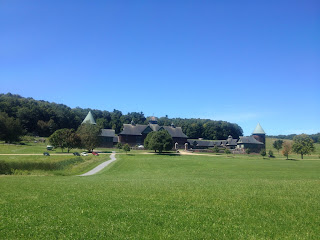 We had a really touching experience when, with typical brashness, I asked a man emerging from a fire station if he was a fireman. He said that he was, disappeared back inside, and emerged again, asking whether we would like to see the inside. He opened the main door, but let us in through the side door. To the side of the single engine, was a display from the wreckage of September 11. They lost a man and the pieces you see in this picture are all that were salvaged. 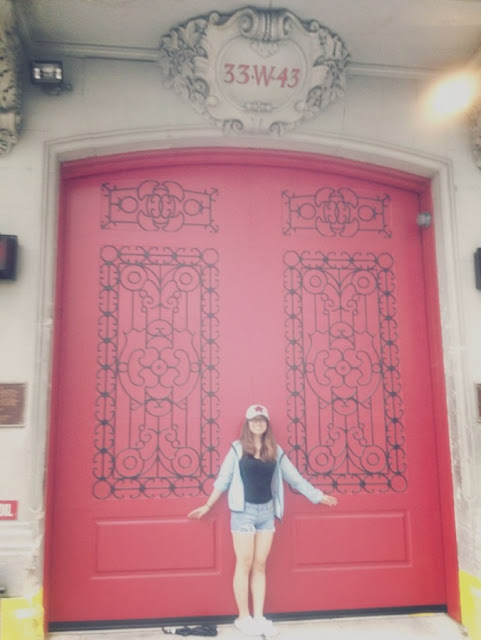 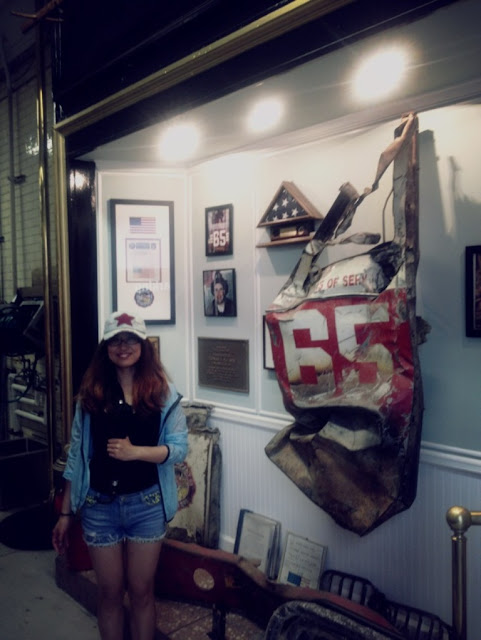 Monday, August 19
7 AM or after- Pick up car at MHT Enterprise
10 AM- Breakfast at the Friendly Toast with Bud & Barbara James
12 PM- Day hike at Bradbury Mt. State Park with Bryan Wentzell
4 PM- Clambake in Boothbay with Gabrielle DiPerri, Martina M. and Roger Duncan at "The Manse"
Stay in Portland, Maine, with J. Bryan Wentzell and Anna Fincke

Wednesday, September 4- Wave to “The Windy City”
8:30 AM- Bagel Works with Suzanne Harvey
10:15 AM- Secretary of State's Office
11:10 AM- Oath of office administered by Judge Macnamara at the Court House
11:50 AM- Enterprise at MHT

Posted by 李喆老师 Alexander Lee at 10:06 AM