Last weekend I went to a nearby site and while I will write a few of my own observations, The Lonely Planet managed to offer such a good description that I thought I would repeat it here with attribution:

An incense stick's toss away from the Lama Temple, the desiccated Confucius Temple had a pre-Olympics spruce up that failed to shift its indelible sense of otherworldly detachment. Like all Confucian shrines, China's second-largest Confucian temple feels rather like a mausoleum, so expect peace and quiet. Some of Běijīng's last remaining páilóu bravely survive in the hútòng outside (Guozijian Jie) while antediluvian bìxì (tortoise-like dragons) glare inscrutably from repainted pavilions. Lumpy and ossified ancient cypresses claw stiffly at the sky while at the rear a numbing forest of 190 stelae (stones or slabs etched with figures or inscriptions) records the 13 Confucian classics in 630,000 Chinese characters.

A ghastly footnote lies unrecorded behind the tourist blurb. Běijīng writer Lao She was dragged here in August 1966, forced to his knees in front of a bonfire of Běijīng opera costumes to confess his 'antirevolutionary crimes', and beaten. The much-loved writer drowned himself the next day in Taiping Lake.

West of the Confucius Temple is the Imperial College (国子监; Guózǐjiàn), where the emperor expounded the Confucian classics to an audience of thousands of kneeling students, professors and court officials – an annual rite. Built by the grandson of Kublai Khan in 1306, the former college was the supreme academy during the Yuan, Ming and Qing dynasties. On the site is a marvellous [sic] glazed, three-gate, single-eaved decorative archway. The Bìyōng Hall beyond is a twin-roofed structure with yellow tiles surrounded by a moat and topped with a shimmering gold knob.

I did not know about Lao She's trial here, but beyond this interesting tidbit, I found the appraisal accurate and the language vivid. 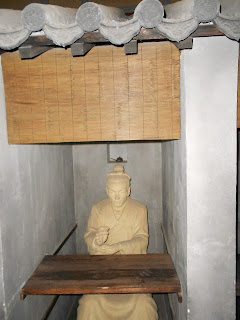 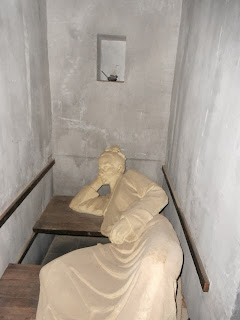 The dorms of the scholars seemingly used a system of movable boards to transform their cells from beds into study chambers or an eating table.