As the head of a social studies department at a reputable Guangzhou high school,  I care about American history and, as a lawyer and amateur civil rights activist, I know something about poll taxes. Paying to send my ballot through China Post, EMS, DHL, UPS (the green option), FedEx (which may rise to the occasion and mail US ballots for free!), etc. is, in my opinion, possibly a poll ta. Even if I might, personally, be able to send my ballot in a platinum envelope by private jet...which I cannot, there are those who cannot. That is why Americans overseas are able to send ballots through their consulates' diplomatic pouches. Yet, I also understand from the consular officer who just called me that it is a service but not a requirement, dependent on volume (which, incidentally, is very low now), that the consulates accept ballots to be mailed in this fashion.
Mailing out ballots without a poll tax is discretionary in 2020!?
At approximately 10:40 AM today, I entered the US Consulate in Guangzhou passing two male security guards at different checkpoints with my backpack and proceeded to the door of the security checkpoint where a young woman was helping another American with a green card. After she finished helping him I told her I was there to mail my ballot and she said that I needed an appointment. I insisted on being seen, explaining that staff were supposed to be retrained in January or February  after my last visit where I was told that mailing a ballot does not require an appointment, and, at that point, she asked me if I spoke Chinese, then summoned another guard who spoke English. That guard had me call American Citizen Services and they required my name (just my name) so that they could call the door guards to let me in. They let me in and then told me that since I had a laptop in my bag, I would need to leave and come back.
At about 11:10 AM, I came back, bearing only keys and a cell phone, which I left at the door in a cubby, and thanked them politely.
Then, I went to the window on the second floor with my envelope which I believed was too large for postal regulations. I asked if it was an acceptable size and she asked me to wait while she went to check and then she returned saying I was all set and I could just email them, like last time, to get the tracking number. I do not blame this person for doing a poor job in checking the size requirements, but I am worried that others' ballots will be rejected by USPS somewhere along the chain (or even by some consulates) because they do not meet size requirements. This possible objection to ballots needs to be resolved!
At about 12:10 pm, I called to say that I was confused because I did not think my ballot was the right size and they told me the person who handled it would call me back and let me know if I needed to return to retrieve it. Imagine returning to retrieve a voted ballot when the staffer at American Citizen Services did not even check my passport, although, to her credit, the door staff did check my passport after I was forced to call and give my name.
I received the promised call at about 1:25 PM Tuesday in China and it was from a male consular staffer who was very helpful, professional, and understanding, not the Chinese staffer who had helped me, who was also helpful. I have messaged them now and asked for the tracking number. They will also RE-confirm that the envelope size is appropriate. I hope this information is helpful for you as we strive to improve the overseas American voting experience ahead of the remaining primaries and November 2020 General Election. Thank you. Apologies for being such a strident, Kafkaesque character, but given the alacrity with which these problems need to be solved I do not know how else to communicate efficiently with those who need to know about these problems.  I hope they are local and not happening across the globe.
Alexander Lee
Guangzhou, China 🇨🇳
PS I buried the lede: I was almost turned away again from the same consulate. If I was not versed in my rights, I would have left when the first guard asked me to. This really is not acceptable, even in this plagued time, given past correspondence with this consulate to which this message is a reply. 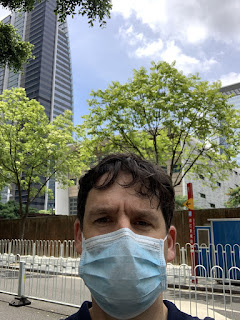 Thank you for taking the time to email with your feedback. Your ballot was well received this morning and we have reminded our staff that U.S. Citizens do not require an appointment to deliver their ballots, even during this difficult time.

Thank you for bringing this matter to our attention.

In light of the coronavirus, it is understandable that an appointment may eventually be needed for all American Citizen Services in China, Hong Kong, and other places in the world. On Wednesday, in Guangzhou, I was turned away with my completed ballot and asked to make an appointment. Today, I brought my ballot and it will go in the next diplomatic pouch. I received very good service at the counter and want to thank you for helping Americans fulfill their sacred duty to vote during this troubling time, when so much else weighs upon us.

I hope that at all consulates across China and in Beijing's embassy facility, the paid Chinese security personnel can be reminded that nobody who appears to mail a ballot, even in this trying time, should be turned away...as I understand that is still the policy.

Thank you and sorry to add to your burden during this busy and trying time.