A Night with the Big APL: Visa or Mastercard?

Woke up at 5:30 and puttered for a while. Got to the Laundromat a little after seven and used the washer and dryer so my stuff would be clean and dry for the movers on Thursday! Cathy and I worked on tones and syllables for 45 minutes after I had a nice good-bye with Secretary of State Bill Gardner. Handed over the keys to the Project Laundry List office after a 1.5 hour meeting with a board member and our bookkeeper.

Left Concord at 3:40 PM after the official letter of invitation arrived by UPS and I am now in New York City so I can be at the consulate at 9 AM to get my Visa.

Rolled into town a tad before 9 PM. My friend and I went to The Ear Inn, first, which got its name because the owners wanted to avoid the hassle of getting permission for a new sign. It used to just say Bar. I had trout and horseradish. The waitress was Chinese from some unpronounceable city in the southeast of China. The food was mezzo mezzo.

We continued to Ferrara Bakery & Cafe:

New York in the Gay Nineties had almost everything, except for a place where an opera lover, after a night of Verdi or Puccini, could relax, play a Neapolitan card game called "scopa" and drink a cup or two of espresso.

This situation was remedied when our great grandfather, Enrico Scoppa and my great grand-uncle, Antonio Ferrara, opera impresario and showman, opened a cafe called Caffé A. Ferrara. Caruso thought the coffee marvelous but especially loved the cookies and cakes.

I had three kinds of sorbet--passion fruit, mango, and guava--and a raspberry flavored cappuccino. Full? 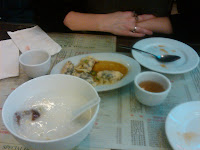 Hardly! We then went to the Great NY Noodle Town where I had congee with duck (of course). Doesn't it look good? My gracious guide had steamed shrimp dumplings. Now I was full, but who does not have a weakness for shawarma?

We went to Mamouns Falafel Restaurant and I had a sandwich without the bread. They looked at me like I was speaking Greek.

The Slovakian tour guide-ess knew just where to go and now it is time for bed, because a little confused cuisine awaits at Nusbaum & Wu (on the Upper West Side). Bagels with wasabi? Meeting at 7:30 AM with a Barnard student from Changchun and Jonah Phillips' mother.
Posted by 李喆老师 Alexander Lee at 2:45 PM No comments:

With the uproar over Professor Amy Chua's "Battle Hymn of the Tiger Mother" and the comments on Kristoff's Sunday, January 16 column, I have begun to delve into the mysteries of Chinese education and parenting, which is to say Confucian teaching practices versus American teaching methods.

The main portion of my job will be at Northeast Normal University Middle Schools where I will be working with very advanced middle schoolers preparing them for the TOEFL. If any of you teachers out there have thoughts about teaching to the test, please post a comment to this blog.
Posted by 李喆老师 Alexander Lee at 11:03 PM No comments:

To send me a care package or a letter

I arrive on February 11 and they have an apartment for me with lots of light and lots of shelving. Very exciting. There is no house to house mail delivery, though, so any mail should be sent to:

The Dawning of the Age of Aquarius?

Last night, some dear friends cooked me a good-bye dinner of duckling. This is my favorite thing in the world to eat and it was a gesture of tremendous generosity and love for which I am deeply grateful. I left with a copy of Balzac and the Little Chinese Seamstress, which I will watch this morning and return to them with their copy of Oracle Bones. Another friend just sent me a video of a place that may just need to get added to my tourism list: Tianmen Cave. You can watch some incredible pilots fly their planes through this arch/cave.

While I was eating duck, Barack Obama and Hu Jintao dined together on pear salad, lobster, dry-aged ribeye steak with buttermilk onions. They even had apple pie and ice cream for dessert. How utterly American! What is most important, though, is that China views the talks as a success. I am more and more confident that China and the United States can find a harmonious future. It would be shear arrogance to pretend that this blog can play any major role in this dialogue, but so many people each day fill my head with their prejudices and views of China. I hope that each of you will candidly ask questions of me while I am there and I will do my best to answer them in a way that fosters harmony between the two great powers of the world. I will not just serve buttermilk onions, though. I hope to give you a glimpse of the raw China, as much as I can.

I am deep into Pomfret's Chinese Lessons, which my twin sister gave me for Christmas. This is a troubling glance at the deep wounds of China's recent past, but there are lots of reasons to believe that things have changed.

My last post was about the Year of the Rabbit perhaps becoming the Year of the Sharp Pointy Teeth, but I think that luck is turning and many good days and weeks lie ahead for China and the United States. Maybe this is the dawning of the Age of Aquarius. Wikipedia reports: According to the Esoteric Christian tradition, such as the Rosicrucians, the proximity and entrance in the Age of Aquarius—occurring after the present Age of Pisces, or age ruled by the "Sword"—will bring to the majority of human beings the discovery, true living and real knowledge of the inner and deeper Christian teachings which the Christ spoke of in Matthew 13:11 and Luke 8:10. I don't know too much about this nonsense, but I do know that Robert Frost made mention of Rosicrucians in a favorite poem of mine that true Communist revolutionaries are likely to embrace:

I advocate a semi-revolution.
The trouble with a total revolution
(Ask any reputable Rosicrucian)
Is that it brings the same class up on top.
Executives of skillful execution
Will therefore plan to go halfway and stop.
Yes, revolutions are the only salves,
But they're one thing that should be done by halves.
Posted by 李喆老师 Alexander Lee at 9:26 PM No comments:

The Year of the Sharp Pointy Teeth?

There is an ancient Chinese curse, "May you live in interesting times." I read the news today, oh boy, about the J-20. People are asking me about Taiwan and the South Korean situation about which I previously posted. This is the Year of the Rabbit and all I can think of is Monty Python's killer rabbit. "Run away! Run away! Run away!"
Posted by 李喆老师 Alexander Lee at 1:44 AM No comments: 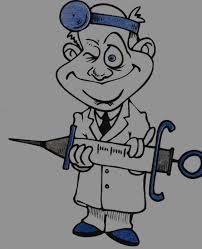 Monday morning I will meet with the Travel Clinic doctor at Concord Hospital so that I can get any last minute immunizations. I hope to see the Three Gorges area of the Yangtze and Hong Kong, Beijing, and Shanghai while I am over there. I may even go to Thailand and Mongolia, but did not put this on my form.

I have made plane reservations that will bring me from Boston to San Francisco for $149.65 on February 2; from San Francisco to Seoul, South Korea for $576.20 on February 6 (leaving SFO on Feb. 5); and from Seoul to Chanchun, China--my final destination--for $366.15 on February 11. That seems reasonable.

This morning I read the chapter called "Money" in Peter Hessler's book, River Town. Everybody in China was very open about money and discussed their salaries, rent, etc. very openly when Hessler was there. I am comfortable saying that it is more than a month's salary for me to get myself to China for this experience and new job! (Maybe a year from now this Yankee will be even more forthcoming.)

The yuan goes a long way. A very good lunch for four people can be had for ten US dollars in Changchun.
Posted by 李喆老师 Alexander Lee at 4:09 AM No comments:

My driveway in Concord, NH, goes slightly down hill toward the street between two late nineteenth century duplexes. As I rolled toward the street, suddenly a hawk appeared and he screeched to a halt mid-air, slipping above my car just in time...or so I thought. The dashboard was covered with tiny, downy feathers. I stopped the car to see if the bird was okay. I looked back up into the part of our driveway where the cars park. No sign of the hawk. I looked again and he had landed with another bird in his talons. This was all the explanation that I needed. As I walked toward him, he lumbered off to my neighbor's yard.

A couple weeks ago as a friend and I drove up the dirt road that leads to Knights' Pond in Alton, an Owl swooped down crossing a few yards in front of our car.

The Chinese together with the Romans saw the Owl as the bird of ill-omen. In China the Owl was common in burial ceramics of the Han-dynasty, which was contemporary with the Roman Empire and to which the Chinese had extensive trade relations. [1]

In China, it is a lucky sign to see or hear songbirds or red-colored birds or Swallows. [2]

Though held in esteem in China, where peacocks were once kept as symbols of status and wealth by the ruling families, the peacock receives only scorn from the rest of the world. [3]

In Asia, Cranes are symbols of longevity and immortality. The White Crane can fly to the heavens and it is a Chinese symbol for "wisdom" and is sometimes called the "heavenly" or "blessed" Crane. Cranes were vehicles of the gods and in China fly them to the "Isle of the Immortals", the legendary home of the eight immortals. A Crane's eggs were used in magic potions to grant eternal life upon its drinkers. [4]

Should I subscribe meaning to my experience this morning with the Cooper's Hawk or with the Owl?
Posted by 李喆老师 Alexander Lee at 12:40 AM 1 comment: