"I shall return" (MacArthur) to blogging more about Korea when I get a moment. King Lee, as they dressed me in the airport "only for foreigners" cultural area, loved that country.

For now, though, I have arrived in China and I want to write about this place that I will call home for a year. My provided apartment is palatial (no sarcasm) and I feel a bit sheepish about it in a nation where people reputedly live four or five people to a room with some regularity.

I spent 300 yuan ($45) at the grocery store, which has more vegetables and meats, more tea and more varieties of household goods than you can imagine in its three stories. For that, I purchased a Thermos (necessary because it is -11F here at 5:40AM); some fermented duck eggs (which I thought were uncooked from the packaging and smell fowl [sic(k)]); a big bag of oatmeal packets to last me a month, which unfortunately have wheat in them because I bought the cheap kind instead of the "dear" kind (clearly the one clerk in the store who could speak the King's English learned it from an Irishman or a UK native); a really big orange (aside: if you ever get to Korea, try a Jeju orange. They are delicious and the Koreans like when you use that word to describe their food); some toilet paper (because there was none in the apartment when I got here, but I am saving up material for a potty post later. Don't hold your nose!); three onions (wrapped together with a bar code so that I did not need a translator); two peppers (ditto); half a pumpkin (ditto); mushrooms (ditto); a lemon; some Tupperware; a liter of Tropicana; five to seven pounds of rice (I dunno how much because it is all Greek to me); and some raisins. I tried to buy a head of garlic and some potatoes, but I had not been aware that I needed to bring them to a clerk before checkout and have them weighed, bagged and tagged. They set them aside. No pictures allowed in the grocery store.

Here is a picture of my kitchen with the egg half unwrapped on my cutting board: 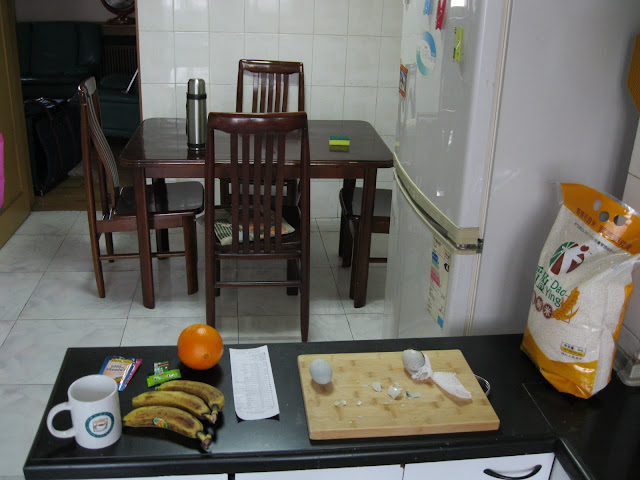 Yesterday, just like today, I also awoke around 5:30 AM to the sound of somebody hocking a lugee in the street outside my window. I watched a copy of Welcome to Dongmakgol (2005) first thing and then went out to buy a 30-foot Ethernet cable at the store so that I could Skype, blog, Facebook, read the news and email, etc. The streets look intermittently like somebody died on them or threw up in them from the red goo and shredded yellowish trash that the fireworks leave behind. This substance has frozen into the narrow, unsanded/unsalted sidewalks and alleys. Sidewalk is slang for parking space and you truly take your life into your own hands every time you step off the curb. Evening before last, I nearly got hit by a man  who had no front light on his moped. I was standing right near three ceremonial howitzers that they shoot off for special occasions--like the opening of a new store. The fireworks will continue for three more days and end in a raging firefight on the night of the 17th.

It is Monday morning, but as David P. (the Director of Studies) told a gathering of the new and returning faculty at a company supper last night, every day here is the same in terms of commerce. "There are no blue laws." Ha. Right. One would not expect that a Sabbath would be offered in a nation whose Constitution says:

Article 36. Citizens of the People's Republic of China enjoy freedom of religious belief. No state organ, public organization or individual may compel citizens to believe in, or not to believe in, any religion; nor may they discriminate against citizens who believe in, or do not believe in, any religion. The state protects normal religious activities. No one may make use of religion to engage in activities that disrupt public order, impair the health of citizens or interfere with the educational system of the state. Religious bodies and religious affairs are not subject to any foreign domination.

It does leave one wondering if there is any rest. I have seen only one man with no legs and a tin cup. It is unusual to be unemployed and the hustle 'n bustle of this neighborhood are evidence that I could find everything I need in a four block radius, including a street of car washes and a full block of wedding planning and wedding photo places. If the growing list of places I want to see in this amazingly diverse nation did not exist, I would be content to walk between the three schools where I will teach and to the restaurants, massage parlors, acupuncturists, and shops that all lie a stone's throw from my window.

Here is some footage as I flew into Changchun airport. 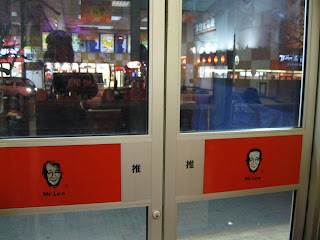 Truly the worst meal that I have had since I hit the road was at Mr. Lee's (pictured below), which is a sort of fast-food place directly across the main avenue from our school. I say "sort of" because they come and take your order, but it is quick service which is evidence that they start preparing your meal hours before you arrive. The pork, which Andrew of St. Louis (MO) and I both ordered, was like mush. Andrew and I had an afternoon of setting up his computer and playing Scrabble. 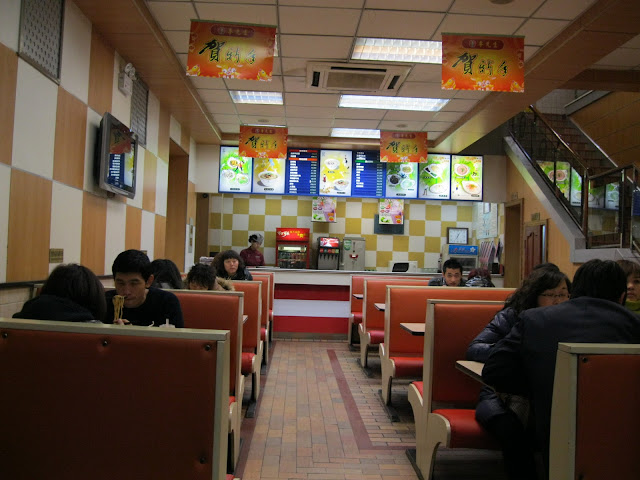 Posted by 李喆老师 Alexander Lee at 7:57 AM