On blogging, kiwi berries, and cabbages

Far from the madding crowd's ignoble strife
Their sober wishes never learn'd to stray;
Along the cool sequester'd vale of life
They kept the noiseless tenor of their way. 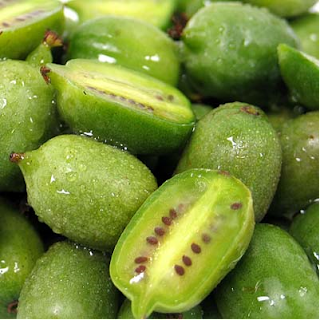 This activity--sitting down to write a few words that intrigue readers half way around the world and trying to say something original and relevant while sharing my own photographs--is inherently self-indulgent. One of my occasional readers brought this to my attention with his usual tact. As I contemplate spending another two years here, I am not sure if I can continue apace with my updates, because I am busier and I want to keep my nose clean.

Lord knows, there is much to write about with the Dalai Lama unable to attend Tutu's 80th birthday, with the brother of Liu Xiaobo visiting him in jail, the "yuan bill" being debated in the US Senate, the gift of arms from my country to Taiwan, etc. One cannot open a newspaper without being mired in stories about these things.

Fantastic as it may have been, I had a higher hope that this could be a forum for educating Americans about our biggest adversary and strongest ally. The Middle Kingdom remains a fascinating place to live at this point in human history. This blog is not particularly revelatory for those who already live or work here for part of the year, but I hope it offers a glimpse of life half a world away. Waking Green Dragon had about 400 readers when I left and that number has not grown exponentially. I need your help in spreading the word.

On a lighter note, a couple of my friends have taken to teasing me about my obsession with the new fruit varieties that appear each week at the fruit stands here. Some fruit is sold by vendors on the street with a yoke and two baskets. From one of these women, I bought kiwi berries and, from her second basket, black currants. Yum.

Finally, I would like to offer a couple pictures of my buildings courtyard at this time of year, which are filled with drying leeks and Chinese cabbage. The usual detritus of a city that only recently installed trash cans and recycling bins swirls around in the courtyard as well. Yesterday morning, I encountered one of the hundreds of orange-vested, broom-carrying street sweepers scraping dust and plastic wrappers and all manner of dirty litter up to the edge of one person's pile of leeks. All of these will be eaten in soups throughout the winter after being meticulously cleaned by Chinese housewives. Most people here have much bigger things to worry about than a South African birthday party. I do not mean to belittle the issue, but such debates are far from the consciousness of the madding crowd here. 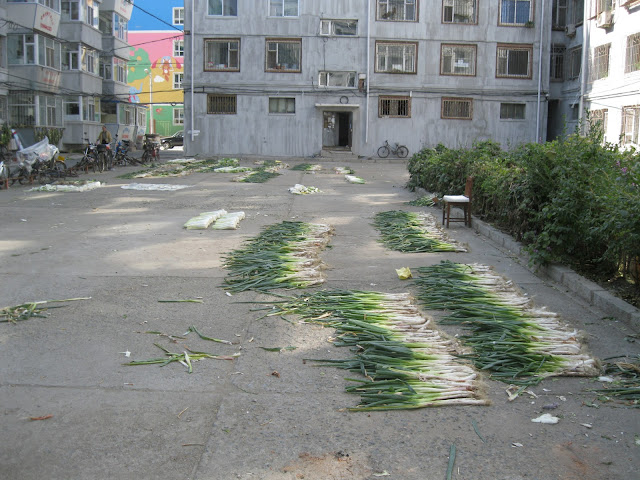 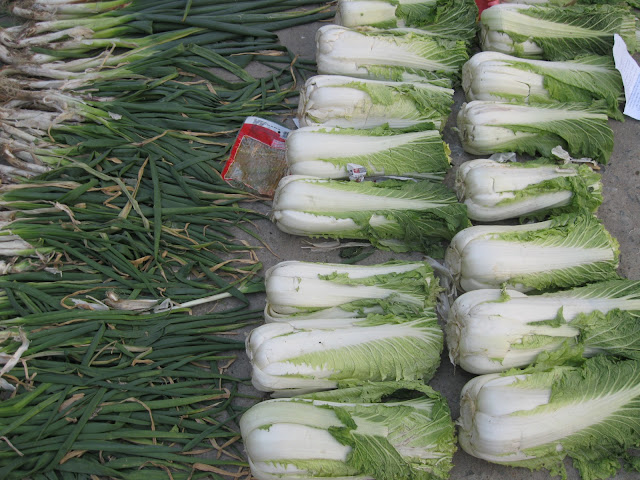 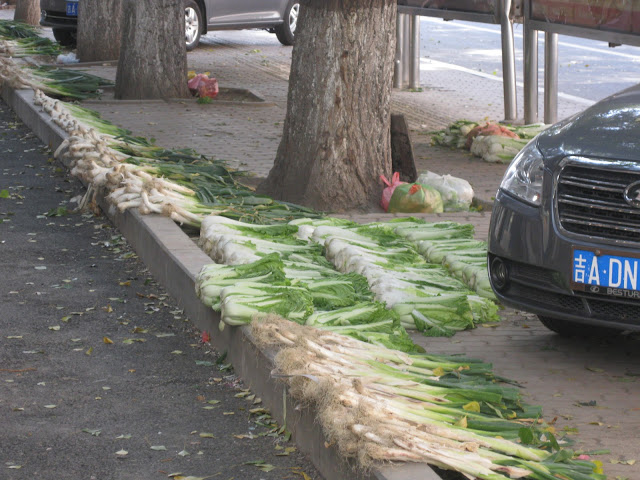 Posted by 李喆老师 Alexander Lee at 9:56 AM