My last post mentioned the gu zhong. This is a gorgeous instrument, aesthetically and musically. 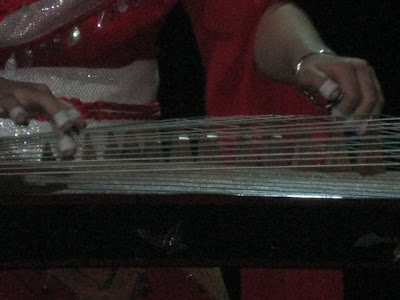 I cannot say anything new about the array of ancient instruments in China, because I know almost nothing about them. Here is a great picture of many of them:

The traditional erhu uses python skin! I have heard it played in parks by old people many times. It is the most prevalent of the instruments shown above, I would guess.

As usual, Wikipedia is a great source of information for most of these instruments. Here is some information about where they got the name erhu:


The first Chinese character of the name of the instrument (二, èr, two) is believed to come from the fact that it has two strings. An alternate explanation states that it comes from the fact that it is the second highest huqin in pitch to the gaohu in the modern Chinese orchestra. The second character (胡, hú) indicates that it is a member of the huqin family. The name huqin literally means "barbarian instrument," showing that the instrument likely originated from regions to the north or west of China inhabited by non-Han peoples.

I would like you to hear the erhu for yourself. It emits a mournful and adventurous sound. Here is a six-minute sample:


If you want to learn the basics, you can see this video:


Finally, I want you to hear Ave Maria on the erhu.