The meaning here lies in the fact that Suzhou was renowned for its beautiful and highly civilized and educated citizens, Hangzhou for its scenery, Guangzhou for its food, and Liuzhou (of Guangxi) for its nanmu wood coffins which supposedly halted the decay of the body.

"Heaven Above, Suzhou and Hangzhou below." (上有天堂，下有苏杭)

This phrase has a similar meaning to the English phrases "heaven on Earth" or "God's country".


In four hours I will leave my house for the airport. I will board a plane bound for Shanghai, which is where I went last year for the May holiday, as well. It is hard to believe that it has been a year.

This time, I will also board a train, but instead of going to Suzhou, as I did in 2011, I will go first to Nanjing and then to Hangzhou.

Nanjing ("Southern Capital," as opposed to the Northern Capital of Beijing) is storied. It is most associated, sadly, with the Rape of Nanjing, a massacre perpetrated by the Japanese in the beginning of the Second World War; however, for me, the excitement lies in the fact that it lies on the Yangtze River. [Initially, I had planned to go to Wuhan now and to see Three Gorges, but a variety of factors conspired against that idea.]

I have seen the movie called "The Flowers of War" (2011), but have not yet seen "Nanking, Nanking" (2009). Both of these movies chronicle the atrocities of 1937. The first ten minutes of the latter appear below. 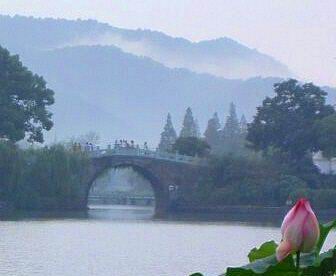 Hangzhou is most famous for the West Lake. It was made a UNESCO World Heritage Site in 2011, and was described as having "influenced garden design in the rest of China as well as Japan and Korea over the centuries and as reflecting "an idealized fusion between humans and nature."


As late as the latter part of the 16th and early 17th centuries, the city was an important center of Chinese Jewry, and may have been the original home of the better-known Kaifeng Jewish community.

There was formerly a Jewish synagogue in Ningbo, as well as one in Hangzhou, but no traces of them are now discoverable, and the only Jews known to exist in China are in Kaifeng.

In 1848 during the Qing dynasty, Hangzhou was described as the "stronghold" of Islam in China, the city containing several mosques with Arabic inscriptions. A Hui from Ningbo also told an Englishman that Hanzhou was the "Stronghold" of Islam in Zhejiang province, containing multiple mosques, compared to his small congregation of around 30 families in Ningbo for his Mosque. I am also hoping to attend Mass on Saturday evening at Immaculate Conception Cathedral. The current cathedral in Hangzhou, dedicated to Our Lady of the Immaculate Conception, was originally built in 1661 by the Italian Jesuit Martino Martini, and is still one of the oldest churches in China. Its original Romanesque form was designed with three naves, and two rows of columns separating them. The two side altars venerated statues of St. Peter and St. Paul while the central altar was for the worship of Christ. At the time of its completion it had been lavishly decorated and was said by many to be the most beautiful church in China. Of note were also the large frescoes painted all over the church, that as the Jesuit Charles Le Gobien notes in his "Histoire de l'édit de l'empereur de la Chine", were based on standard Western imagery (the conversion of St. Paul, the conversion of the emperor Constantine, etc.), but were painted by Chinese artists in the Chinese brush style.

The world's largest tidal bore races up the Qiantang River through Hangzhou reaching up to 40 ft (12 m) in height.

Hangzhou is also the terminus of the Grand Canal, which is the world's longest canal.

Stay tuned to find out what I really do on this luxurious six day vacation. Tomorrow night, I will be at the Rock & Wood Hostel.


Posted by 李喆老师 Alexander Lee at 4:18 AM