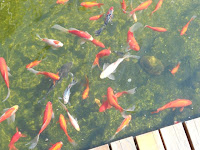 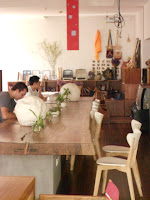 On my first full day in Shanghai I went to Qibao Ancient Town from the lovely hostel where we stayed. The Rock & Wood Hostel was so amazing that we begged them to allow us to come back for one more night before we flew home. It had an award for cleanliness hung on the wall from hostelbookers.com and it deserved it. The delightful fish pool with a boardwalk. It had a long table and an airy, light-filled space, decent drinks and fried rice. Furthermore, the staff were friendly and attentive and the bed was tremendous. What else can you ask for in life...or in a hostel?


After meandering into the area from the state-of-the-art subway system, we came across a school that teaches the Game of Go (aka weichi); how to play the pipa, erhu and guzheng, as well as other traditional Chinese instruments; the art of tea; and how to do calligraphy and traditional painting. If you mastered the four skills qin (instrument), qi (Game of Go), shu (write in calligraphy), and hua (paint), you were considered a lady. The sentence in Chinese is 琴棋书画样样精通, which essentially means that if you were a girl from a respectable family, you had to master these four arts.

Qibao is full of places to shop and is famous with locals for its food, but for me it was also a treasure trove of fascinating history. I bought a ticket for 30RMB that allowed me to see eight sites. My friend went shopping and bought a beautiful dress for herself.

One museum was about cricket fighting; another had a collection of more than 1,000 doll-house sized, traditional Chinese objects and relics; there was a pawn shop museum; still another walked you through the history of cotton textiles. The most interesting display here was a wax figure jumping up and down on a stone. Historically, he would have had the nearly finished textile beneath his feet and the jumping up and down would have given it a sheen.. One museum was similar to the Shanghai History Museum in that it had wax figures performing various crafts and domestic tasks. 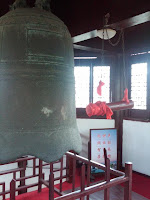 At the entrance to the historic area, there was a bell tower, to which my ticket granted entrance. Like a child, I ascended and rang the bell. I was alone in the bell tower and it was peaceful.


I shot some lousy footage on my Blackberry at the museum about shadow puppets. There was an adorable, Jewish-looking French family with two curly-haired cherub boys and a girl accompanied by a stunning Chinese tour guide. She wrangled with the proprietor who opened the room where they sometimes do shows and the docent did a minute-long demonstration of shadow-puppetry from behind the screen.

Finally, there was the Zhang Chongren Memorial Hall. Zhang Chongren was an accomplished sculptor and painter whose subjects included Francois Mitterand and Deng Xiaoping. He was also a noted painter. The museum has been open since 2003 and is inside a Ming-Qing Dynasty style brick and wood courtyard. His influence on Hergé, the creator of TinTin, is why he is best remembered in Europe. Wikipedia reports:


Hergé's early Tintin albums were highly dependent on stereotypes for 'comedic' effect. These included evil Russian Bolsheviks, black Africans as lazy and dumb, and an America of gangsters and cowboys and Indians.

At the close of the newspaper run of Cigars of the Pharaoh, Hergé had mentioned that Tintin's next adventure (The Blue Lotus) would bring him to China. Father Gosset, the chaplain to the Chinese students at the University of Leuven, wrote to Hergé urging him to be sensitive about what he wrote about China. Hergé agreed, and in the spring of 1934 Gosset introduced him to Zhang Chongren. The two young artists quickly became close friends, and Zhang introduced Hergé to Chinese history, culture, and the techniques of Chinese art. As a result of this experience Hergé would strive, in The Blue Lotus and subsequent Tintin adventures, to be meticulously accurate in depicting the places Tintin visited.

I really enjoyed meeting the proprietor of the Shanghai Propaganda Poster Art Centre. I asked him about how he got into it and I also asked if he had granted interviews. He referred me to his website and showed me his prized possession, which was a dazibao. We had an interesting conversation about the mistakes of Mao Zedong and Deng Xiaoping. He acknowledges that China would be very different were it not for Deng. 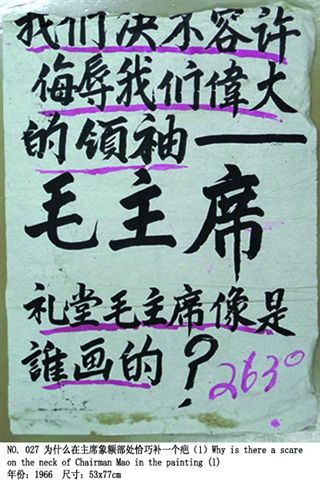 Dazibao (Big Character Poster) Art
This collection of hundreds of Dazibao (Big Character Posters) came to me just by chance when they were used as wrapping paper for Cultural Revolution artifacts and photos that I obtained. When I unwrapped them, and saw these Dazibao, I was shocked. They no longer looked as they once did when they were posted on walls to rally public opinion for political struggles. Now they resembled freehand contemporary art. I have no intention of reading these pieces now, but just enjoy their art form. They are so special and beautiful.

Such posters were the most powerful artworks of the Cultural Revolution. Each one represents the fear, violence, paranoia and chaos of that era. It was a time in which students denounced teachers as reactionaries, either because the students actually believed those accusations or because they feared that any student who did not do so would be considered a rightist-sympathizer.

Many of the posters were imaginative creations. They bore almost no link to any truth, yet had a powerful ability to drag the physical world into their illusions. In fact, Dazibao were created by Mao as a weapon in the Cultural Revolution. China is the birthplace of paper, and Mao always thought of himself as a calligrapher. Perhaps he was the only person in history to start a revolution with a paper and pen. Describing these works of calligraphy as pieces of art, as opposed to historical documents, brings up ethical considerations about what art can be used for and what it can do.

Dazibao suddenly disappeared after the Cultural Revolution, as people hated what they stood for, and nobody saw them as having any value as an art form. After finding this collection, I put ads all over the country seeking other original Dazibao peeled from walls. Nobody replied to my ads, because such posters are so rare now. Our collection is probably the only one like it in the world.

I was a university student during the Cultural Revolution. The school campus was full of Dazibao, posted on walls. Even today, when I close my eyes, I can still see them vividly in my mind. I never expected that, years later, I would be showing Dazibao as art. I smile with satisfaction when visitors walk into the exhibition room and express great surprise upon seeing the collection. I am very proud to be the first person to discover the art value of Dazibao. These posters are unsurpassed as people’s art, not only as a historical witness of the Cultural Revolution, but also as priceless treasures of Chinese contemporary art.

Also, the museum had a large number of posters focused on American "imperialism" and he has a huge collection of Mao busts. There are some lovely posters of Shanghai ladies from the early- to mid-Twentieth Century, as well. 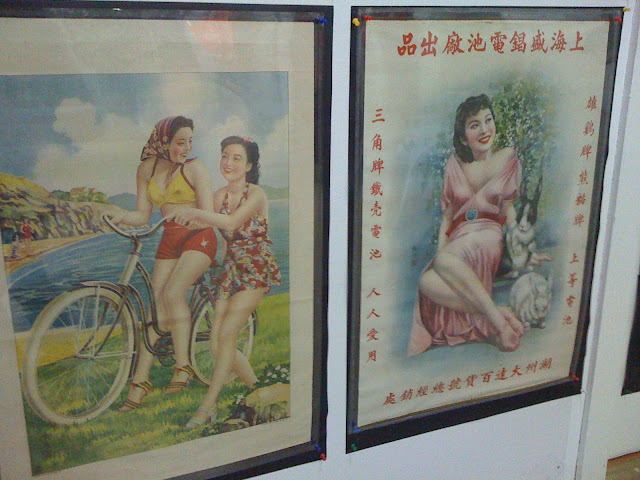 Posted by 李喆老师 Alexander Lee at 11:30 AM