So, if you go for oysters and I go for ersters
I'll order oysters and cancel the ersters.
For we know we need each other,
So we better call the calling off off!
Let's call the whole thing off!

Teaching English or the King's English, that is the question? Ay, there's the rub. My father says tah-mah-to (his mother was British); my Pilgrim-stock mother, toe-may-to. Is it honourable for an American to ask for aubergine? Is Greenwich really the centre of the world?

The old capital of China is Nanjing, but you will often see it spelled as Nanking in old documents. Like Beijing (formerly, Peking) this change is due to one of the great things Mao did--formalized Pinyin, a romanized system for teaching simplified Chinese. My friend, who is Chinese, could not understand the people in Nanjing and Hangzhou sometimes, because of their accents. One of the interesting parts of China is that the Mandarin, where Mandarin is even spoken, varies tremendously. Reputedly, Changchun and Harbin are among the best places for standard putonghua (aka Mandarin). If you go to Beijing, the accent is long on the er （儿）sound. I don't know how to characterize the Southern dialect.

Not only do the people speak funny, but they stared at us unabashedly. Perhaps, it was her beauty, but I am fairly sure it was my immutable melanin that attracted attention. Maybe I have mentioned before that there were vacationing families in Beijing that approached me for a picture and sometimes in Changchun I will walk past somebody or see somebody craning his neck back in a bus window to inspect the funny-looking white guy, but in Beijing and Changchun (and, of course, in Shanghai) that is the exception. On a holiday weekend in Nanjing and Hangzhou, it was the rule.


Anybody, who has traveled with somebody knows there are certain challenges. Anybody, who knows me, knows there might be more. All was well on Sunday when we got to Nanjing on the train before noon, as planned. We got on to a bus and I even said, "Wow, everything is going so smoothly." We got off the bus and walked into the hostel where we thought we had reservations. Full. We had come to the wrong place and it took us another hour or two to get to the right place, get checked in, hang our wet laundry about the room (the night prior, I had foolishly hung it out to dry hours before a 3AM Shanghai thunderstorm) before we could set out again. We could choose one thing to do with our little time. We headed in the direction of Purple-Golden Mountain and eventually to the gate of the Ming Tomb, where I had to implore my friend to come with me rather than sit down on a bench and wait two hours while I toured the area inside. In the end, it was more fun with two than one; I think we would both agree.

The Ming Xiaoling Mausoleum is the tomb of the Hongwu Emperor, the founder of the Ming Dynasty. We began by walking up the Sacred Way--an 1800-meter-long winding path that starts near the Sifangcheng pavilion. It includes two major sections: the Elephant Road and the Wengzhong Road. The Elephant Road is lined by 12 pairs of 6 kinds of animals (lions, xiezhi, camels, elephants, qilin, and horses), guarding the tomb. One pair stands; the other sits. 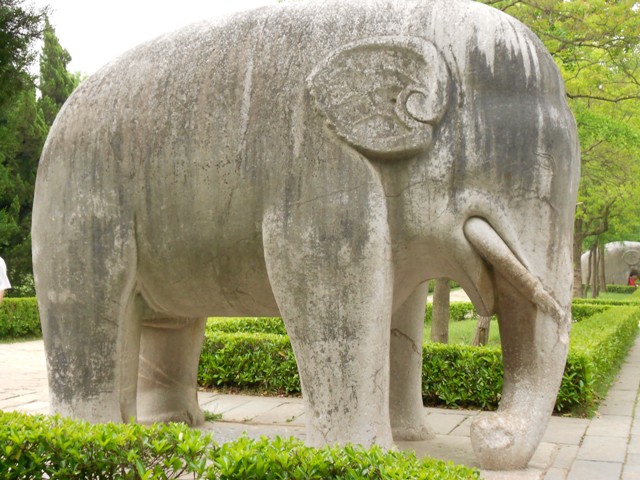 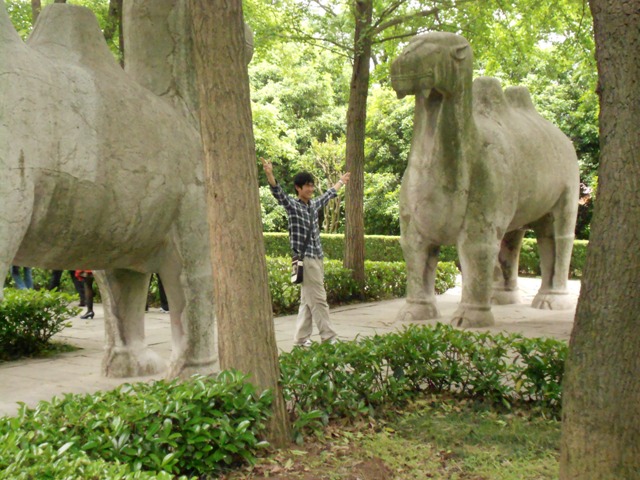 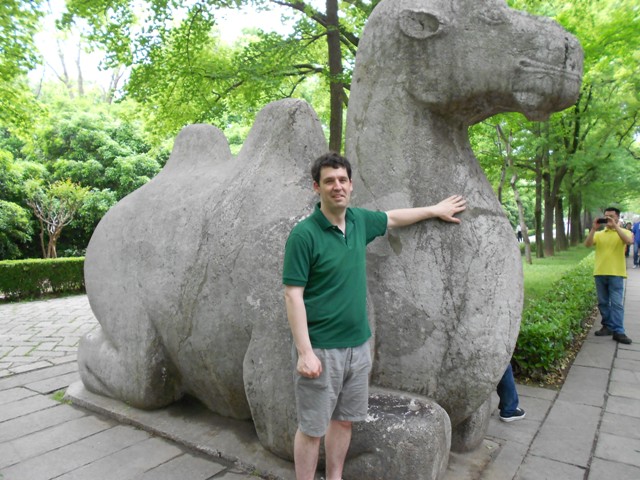 There was a beautiful field of green grass as green and as large as any I have seen since coming to China. The plant-life was fantastic, including this Japanese maple. 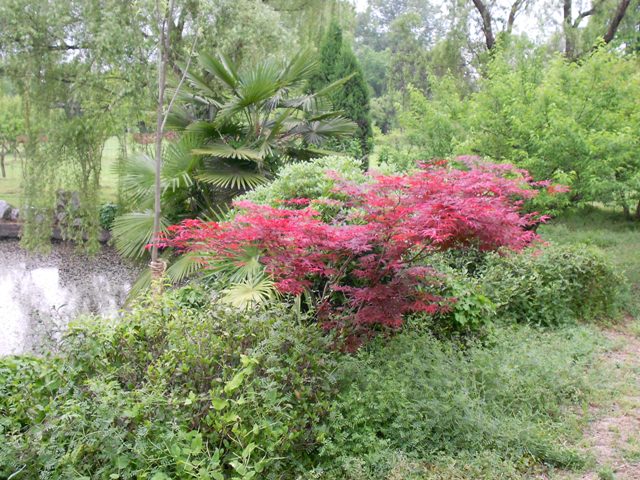 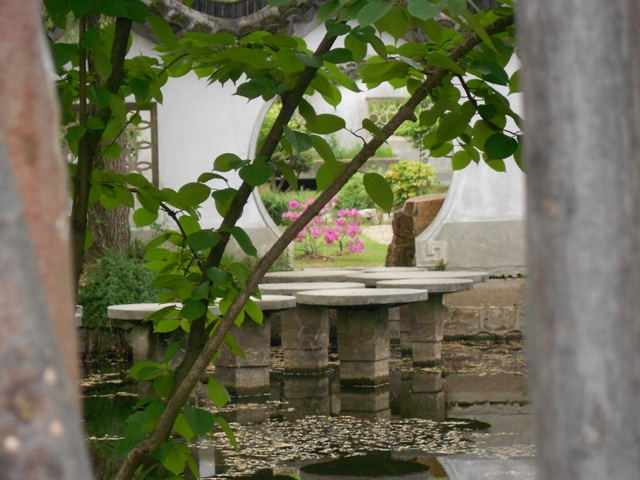 Afterwards, we took a bus back towards our hostel and found a wonderful place for dinner. We were looking for something local--a small, clean restaurant with local dishes, but decided to take a quick detour into a mall that sold Gucci and Luis Vuitton and every other luxury brand you can imagine.

Picture yourself on the seventh or eighth floor of a high-end mall in the former capital of China, Nanjing. If you peered over the balcony into the foyer, you might see a piano that looked like a car, replete with hood ornament:

The restaurant was sort of a Chinese version of The Cheesecake Factory in terms of the cacophony and the trumped up ambience. They had a couple of older women playing the pipa and singing as you waited your turn:


It was chaos. I think we were Number 86 for tables of two. We ordered a meal that far outstripped the Peking Duck Restaurant in Beijing. It included something that looked like a small lobster, but was bigger than the crayfish to which I am accustomed: 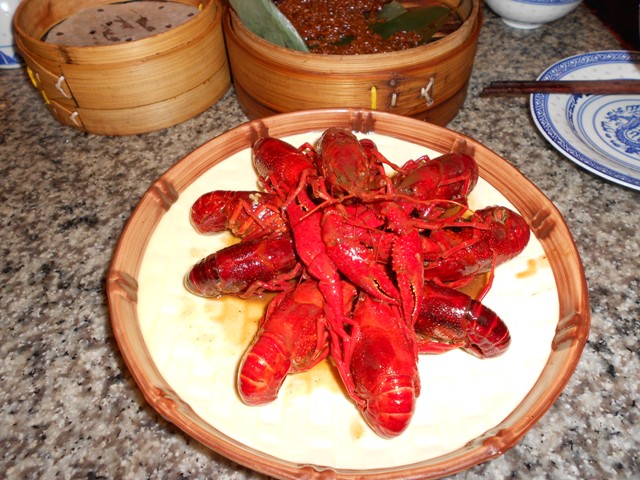 There are about six layers of staff and each has a different costume (like police in Beijing). Here they are ladling out soup. 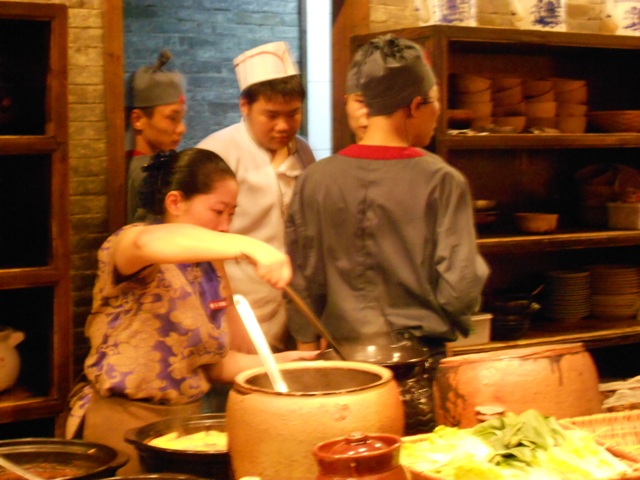 It was a huge place with seating that wrapped around half the top level of the mall. When it is your turn to sit, you follow the man with the paddle, who is in nearly constant motion. 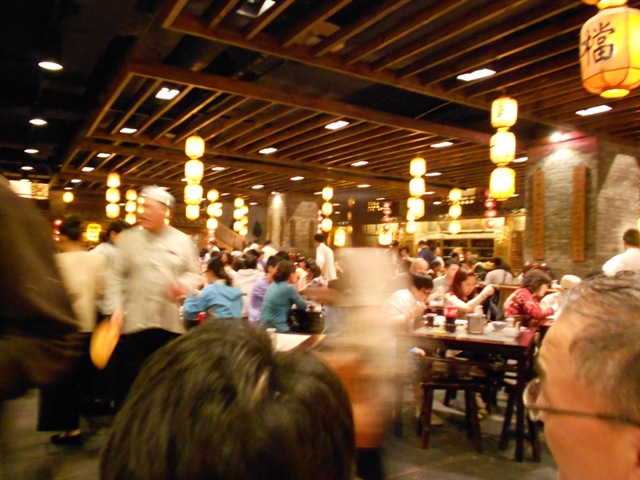 The Morning After: A Gate to the Past

Altogether, our time in Nanjing was okay; however, if we did it again, we would not have tried to cram three cities into six days. Nanjing would be the casualty. Our hostel was in an old munitions factory that is a long way from becoming the 798 Art District of the southern capital, despite its best efforts. The people were not overly helpful or friendly.

Down the hill from our hostel was a very famous gate and we paused to take pictures of it before hurrying off to do one more thing before our fast train to Hangzhou. It may be the only place in China where you can take a picture of something famous and not spot a few people in the frame. My companion claimed that it was in her history textbook as a child.

In the Shanghai Propaganda Poster Art Museum, there were images of the bridge in Nanjing.

I wanted to cross the Yangtze and I wanted to see this mighty bridge. My initial intention for this May Day trip had been to meet a Vermont Law School LL.M. candidate, who is studying in Wuhan, and see the Three Gorges Dam. This bridge might be the second most significant human achievement (though with far fewer ecological effects) to span the Long River. This was my chance to cross.

We hooked a cab at the on-ramp to the bridge. I sat in front and shot pictures of the famous abutments and the statuary. When we got to the other side, we found a bus that would take us directly to the train station for departure to Nanjing.