Yesterday morning I rousted Deborah and said we needed to be on the train by 8:30 AM. Our destination, not Bangor, Maine, but the Beijing Botanical Gardens. It took precisely an hour and a half to get there.

One of the points-of-interest is the Conservatory. As the Confucius Institute say, in typical Chinglish:

Beijing Botanical Garden Public Greenhouse, designed by Beijing Institute of Architect, is located in the western part of Central Axis Road of Beijing Botanical Garden which is at the foot of the Fragrant Hills...Beijing Government invested nearly 260 million Yuan to construct the world’s largest single exhibition greenhouse taking an area of 9800 square meters and a floor space of 5.5 hectares. Its space is as twice as the greenhouse in Kunming World Expo, making it one of the big events in China’s architectural history.

I did not go inside, but will go back in a month when the hills are bathed in vermilion (Beijing's peak foliage season is a month later than Vermont's peak by my guesstimate). 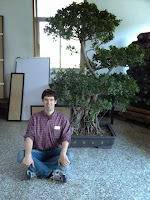 We paid the ten yuan entrance fee and then an additional two yuan fare to see the bonsai exhibit, which had more cool stones than funky little trees, but was nonetheless delightful. It was a bit rushed so we swirled through the bonsai garden in order to allow Deborah to make a 2 PM appointment, which she learned about at 9:20 AM while we were en route.

The roses were in full bloom and were, florally-speaking, the highlight. There was also a tribute to Cao Xuexin, the author A Dream of Red Mansions--one of the four great classic novels. I have read half of it, as earlier posts have indicated. 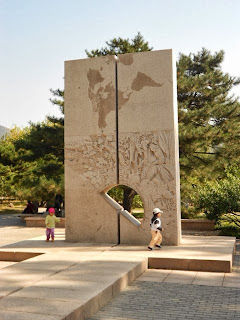 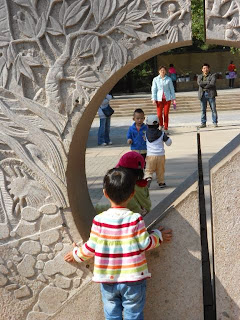 A group of children played delightedly in the vicinity of this detailed sculpture. 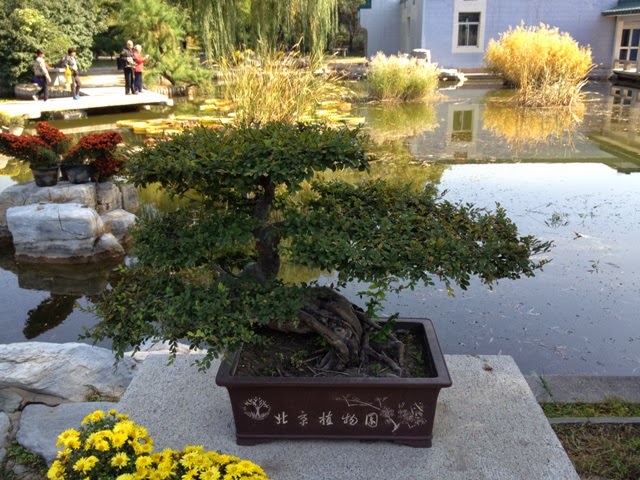 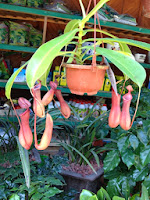 On our way out, we bought a plant from the same vendor that was pedaling this pitcher plant. The plant will sit on our coffee table, which we call a cha ji (tea table). It is customary and proper to have a plant on your tea table to remind those sipping tea (pin cha) of nature, because tea ought really to be consumed out of doors in the verandas of Cao Xuexin's great novels or even high in the Fragrant Hills.

Posted by 李喆老师 Alexander Lee at 10:30 AM