Concerning the Black Stones that are Dug in Cathay, and Are Burnt for Fuel

It is a fact that all over the country of Cathay [China] there is a kind of black stones existing in beds in the mountains, which they dig out and burn like firewood. If you supply the fire with them at night, and see that they are well kindled, you will find them still alight in the morning; and they make such capital fuel that no other is used throughout the country. It is true that they have plenty of wood also, but they do not burn it, because those stones burn better and cost less.

They Burn Better and Cost Less
As the Line 10 subway train chugged through the station called Yuanmingyuan, which is the site of the old summer palace plundered during the Boxer Rebellion (the Chinese call it the Invasion of the Eight Power Alliance, for good reason), I tugged on Deborah's sleeve, pointing to the footnote from my edition of Polo's Travels, in which my new Kindle has allowed me to become enmeshed. It says, in relevant part, "Near the capital coal is mined at Yuen-ming-yuen, and in a variety of isolated deposits among the hills in the direction of the Kalgan road, and in the district round Siuen-hwa-fu.  (Sindachu of Polo, ante ch. lix.)"


But the most important coal-fields in relation to the future are those of Shan-tung, Hu-nan, Ho-nan, and Shan-si [known in the pinyin as Shandong, Hunan, Henan, and Shanxi]. The last is eminently the coal and iron province of China, and its coal-field, as described by Baron Richthofen, combines, in an extraordinary manner, all the advantages that can enhance the value of such a field except (at present) that of facile export; whilst the quantity available is so great that from Southern Shan-si alone he estimates the whole world could be supplied, at the present rate of consumption, for several thousand years. "Adits, miles in length, could be driven within the body of the coal.... These extraordinary conditions ... will eventually give rise to some curious features in mining... if a railroad should ever be built from the plain to this region ... branches of it will be constructed within the body of one or other of these beds of anthracite." Baron Richthofen, in the paper which we quote from, indicates the revolution in the deposit of the world's wealth and power, to which such facts, combined with other characteristics of China, point as probable; a revolution so vast that its contemplation seems like that of a planetary catastrophe. [my emphasis]

I am struck by the prescience of the two observations of the Baron Ferdinand Richtofen to which I have drawn attention. [The baron was the uncle of the more famous "Red Baron," a successful flying ace known to the post-WWI generation for his daring feats and to the post-Charles Schulz generation because of Snoopy.]

The Baron of whom we are currently speaking was born in 1833 in Prussian Silesia. He traveled extensively and had a mountain named for him in China; there is still an eponymous peak, the tallest in the Rocky Mountain National Park's Never Summer Mountains. He is also said to have played a role in identifying gold fields in the decade following the American Civil War.

It took him some time to visit China after his initial intrigue was drawn there, as the Middle Kingdom was, at that time, immersed in the Taiping Rebellion, which continues to be the single bloodiest war in history by some accounts, possibly claiming 100 million lives. When he did get there, his notes were voluminous. The 1911 version of the Encyclopedia Britannica records,


In a remarkable series of seven journeys he penetrated into almost every part of the Chinese Empire. He returned home in 1872, and a work comprising three large volumes and an atlas, which, however, did not cover the entire field or complete the author's plan, appeared at Berlin in 1877-85 under the title of China; Ergebnisse eigner Reisen und darauf gegründeter Studien. In this standard work the author deals not only with geology but with every subject necessary to a general geographical treatise. Notably he paid close attention to the economic resources of the country he traversed; he wrote a valuable series of letters to the Shanghai Chamber of Commerce, and first drew attention to the importance of the coalfields of Shantung, and of Kiaochow as a port. [my emphasis]

It is in this second passage that I find a curious disconnect. If he thought that stripping China of its many resources was tantamount to a "planetary catastrophe," why then was he writing letters to the men he knew would be first in line to exploit them? This topic is explored in an interesting paper by Ghassan Moazzin, a graduate student at Cambridge on the Faculty of Asian and Middle Eastern Studies. His conclusion is simple, "It was only when he started to employ imperialism in order to develop his career and finance his work that he gradually grew more dependent on it. Simultaneously the closer his relationship to imperialism became the more his work was influenced by it." This certainly seems like a plausible explanation, unless the venerable Henri Cordier, who offered the meticulous notes on Polo's Travels, was himself making loose with Richtofen's characterization. 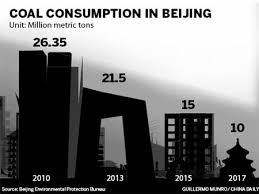 Anyway, these are the encouraging numbers from the government today. China is serious about climate change...or, at least, about reducing air-borne pollutants for its increasingly outspoken populous. When will the United States get down to business?

N.B. The word adits in the footnote of Cordier means the horizontal mouth of a mine, but does not appear in Bill Gates' MicrosoftWord dictionary.