Papal Audience and the Vatican Museum

I exclaimed to the nice boys sitting behind me during the hour which we spent waiting for the Pope, "It is nice weather today. It does not look like it will rain." Although, by the time the Holy See had been driving around in his mobile for an hour of "audience", it was spitting. After the conclusion of his remarks, as I walked to the Vatican Museum, it was raining. Now, at 11:45 PM, it is pouring rain and I can hear it outside my window.

Yesterday, in the late afternoon, I went to Vatican City to gather up the tickets that I would need today. First, inside of a gift shop and post office, I asked at a theatre-esque ticket window where I could get tickets for the papal audience. "You need to go ask the Swiss Guards," came the answer through the barred window. I stepped outside, back into St. Peter's Square and proceeded to the gate where there stood two handsome young Swiss guards in their ridiculous uniforms. It seemed, really, from the crowd barriers that I should not go near them, but I stepped right up to the guardhouse and, sure enough, I was in the right place. The guard whose job it was to block the entrance stepped into his little guardhouse and procured for me the ticket, displayed above on the cobbles beneath my chair while we waited for the arrival of His Excellency Papa Francesco.

This Pope, as wildly popular as he seems around the world, is also beloved by the locals. It is said that they never called Ratzinger (aka Benedict XVI) "Papa," but they love this fellow. The kind students from St. Johns College in NYC, who had never heard of the Grand Tour and who were sitting behind me, took this photo of me. I took a couple of the crowds and of the Holy Father. 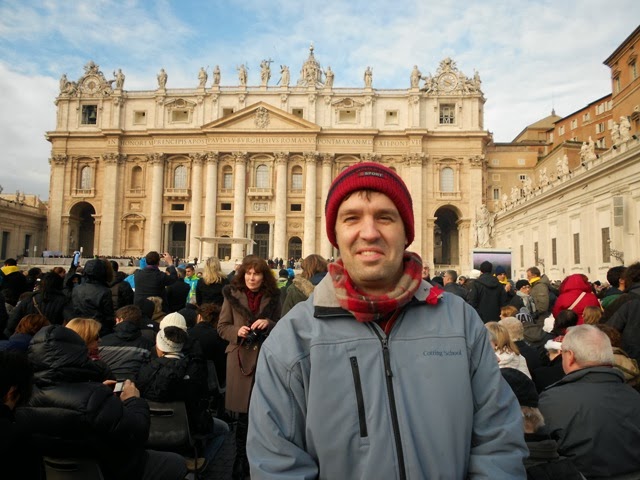 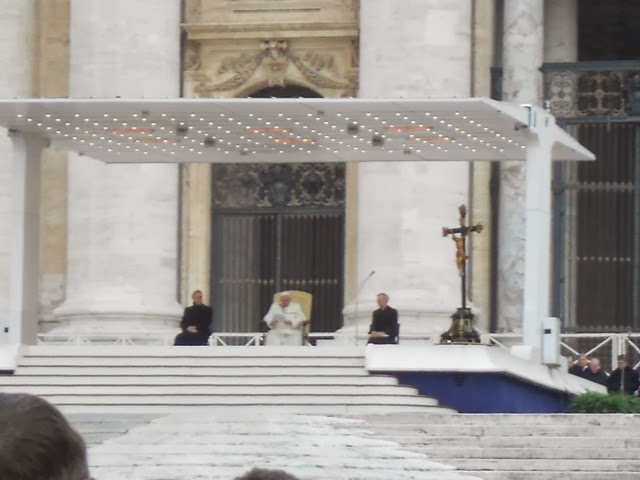 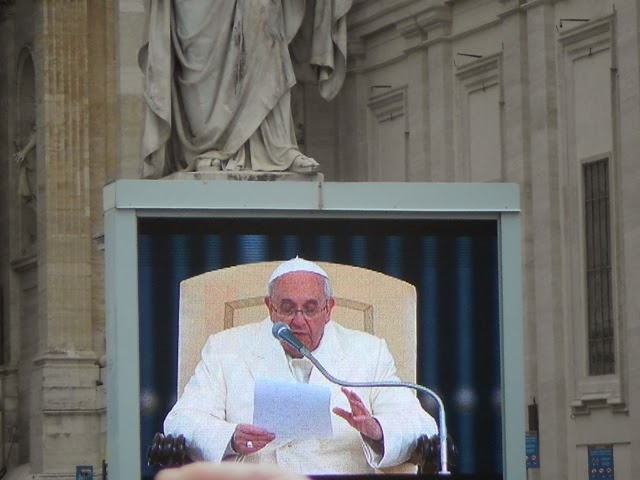 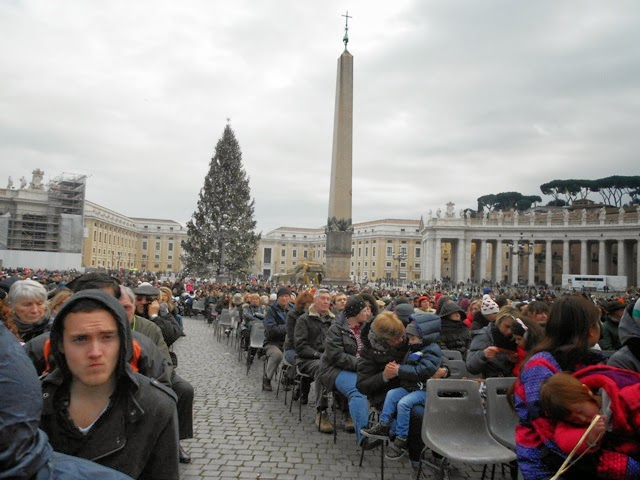 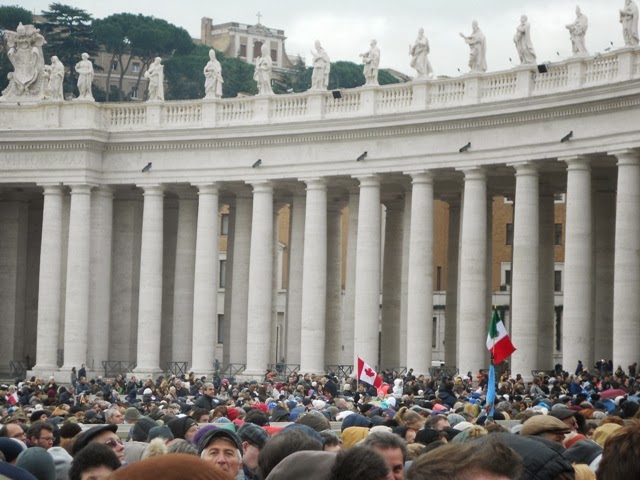 Among the groups recognized from the dais were a parish from the Diocese of Glasgow and St. Andrews in Scotland, seated all around me. They were a jolly group, recognizable by their Santa-style hats in a red tartan. There was a particularly jovial woman from Glasgow, who, upon my complimenting their sense of style, asked me if I wanted one. I said, "No thank you. I would not wear it." She took mock offense so, with a little extra cheekiness, I said, "It is the wrong tartan. I would only wear a green one." Well, she had just the thing for me: 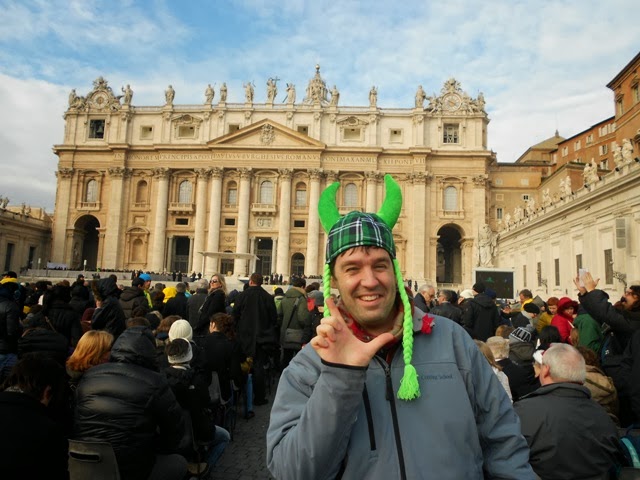 I did my penance for a short time, but removed it before the appearance of His Holiness. After the audience and his remarks, which were focused on the sacrament of confirmation, I proceeded out of the square and followed the wall to the museum. It was just about noon, so I stopped for a glass of the house wine and a plate of risotto en route.

The museum was amazing and quite crowded. I did pay the extra few euros for an audio tour and sat in the Sistine Chapel for a long time staring at Michelangelo's amazing works. The chambers of Rodrigo Borgia were painted by Raphael and also were remarkable. One of my favorite spots along the journey was the gallery of maps. Also, there were breathtaking views from many windows. 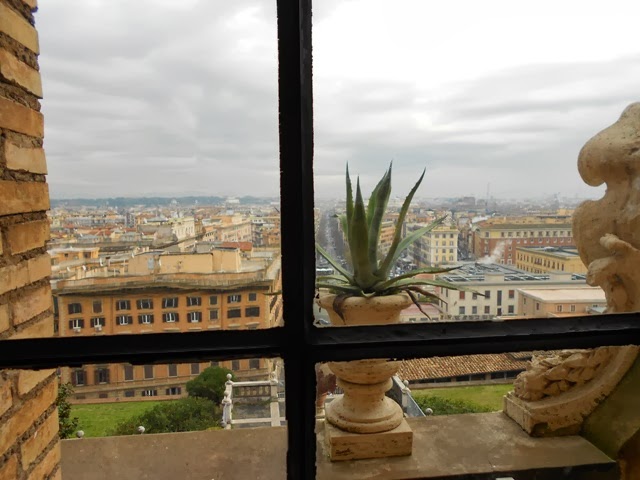 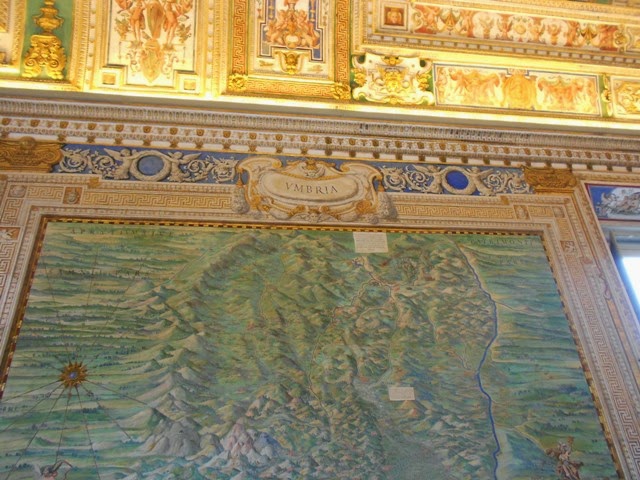 Posted by 李喆老师 Alexander Lee at 6:59 AM