Day Five: My Lazaretto, Musings On the Chronic Insane


A note to my host, a Briton, after yesterday's perambulation of my lazaretto:


When you are ready to do laundry, which need not be for a few more days, I wonder if you have a drying rack or clothesline, as I am historically, since college, philosophically unable to dry clothes in the dryer. I ran an organization called Project Laundry List (www.laundrylist.org) for fifteen years (founded it in 1996) and a decade ago was featured in a full-length documentary by you British chaps, called Drying for Freedom (www.dryingforfreedom.com). (How you love to make fun of Americans!) Given your amazing hospitality and generosity, of course, under the circumstances, I would be willing to accept whatever you want to do...

"New Catholic" is my plot! Unmarked graves, eh? I love cemeteries as a historian and New Englander. There is a tale in my family that I once remarked to my father, at about age ten, "There are so many dead people in New Hampshire" because of the proliferation of Civil War (and earlier and later) family plots, often adjacent to an animal pound. They litter the forests and fields of northern New England on both side of the Connecticut. [Vermont shipped off more people per capita to fight in that war than any other state, except possibly Maine.]

That said, I did not love this graveyard, but I will go back. How utterly depressing to think of all those late 19th and early 20th Century adults with various syndromes (autism and Tourettes) that caused their families to abandon them for life, because they could not cope with what many times was probably not insanity at all. They lived out their lives and then did not even merit a headstone. Are all of the NY Cavalry and Infantry headstones also for inmates or is that a separate contiguous plot? Think of the PTSD after the Civil War and WWI, chapters in our national history buried and drowned out by the PTSD victims of Vietnam and Iraq/Afghanistan.

1.  a hospital for those affected with contagious diseases, especially leprosy [and COVID-19].
2.  a building or a ship set apart for quarantine purposes.


ORIGIN OF LAZARETTO
1540–50; < Upper Italian (Venetian) lazareto, blend of lazzaro lazar and Nazareto popular name of a hospital maintained in Venice by the Church of Santa Maria di Nazaret


The Willard Asylum for the Chronic Insane sits on both the National Register of Historic Places and at the end of my lane. Yesterday and again today, I wandered around the 75-acre farm to which I am legally bound for my period of (supposedly voluntary) self-quarantine. It is adjacent to a cemetery in which more than 6,000 people lie, more than 1,500 of whom were buried by one of their fellow denizens, named Mocha (like chocolate and coffee), or so claims a plaque erected by his admirers. He lived from 1878 to 1968 (90 years), outliving both MLK, Jr. and RFK. 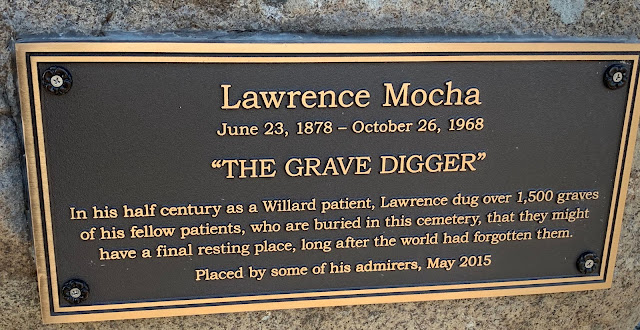 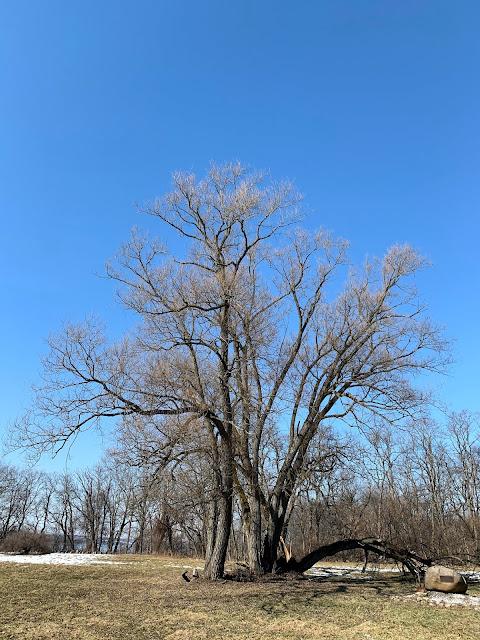 As the video above mentions, most people spent thirty years in the place. Thirty years! I am only here for two weeks, cut off from family and friend. It will probably be long enough. 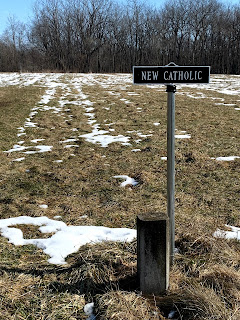 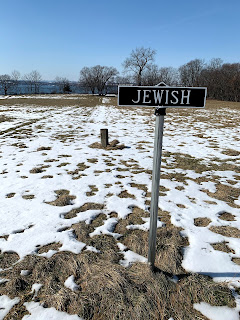 There are road signs in the middle of this barren field (no headstones): One says "New Catholic" (converts? Italian immigrants, Polish?), another "Old Catholic" (Irishman? Quebecois and Marylanders?). One says "New Protestant" (cremated?), another "Old  Protestant" (members of the Society of the Cincinnati? descendants of early settlers in the Colonies?). There is a plain "Jewish" sign and then a fabulous arch for "Old Jewish ✡ Cemetery." 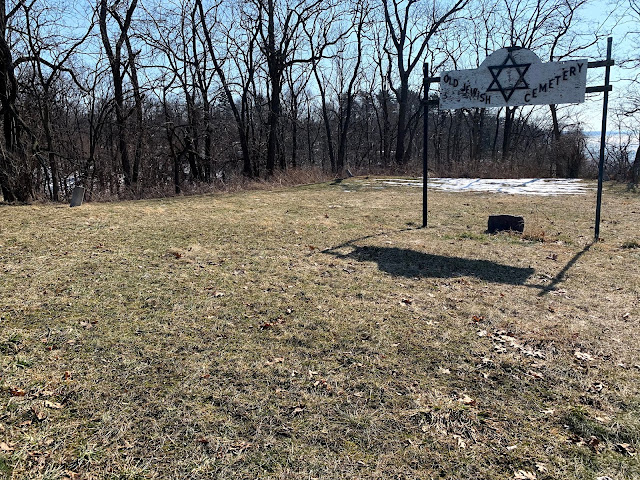 At the far end of the field, by a precipice that goes down to the two-lane highway running along the shore of Lake Seneca is a soldier's field, where there are headstones. Mostly Civil War and Great War veterans (or KIA, perhaps), each man's stone has an American flag. Only one stone, slightly different than most of the rest has a wreath aside it. 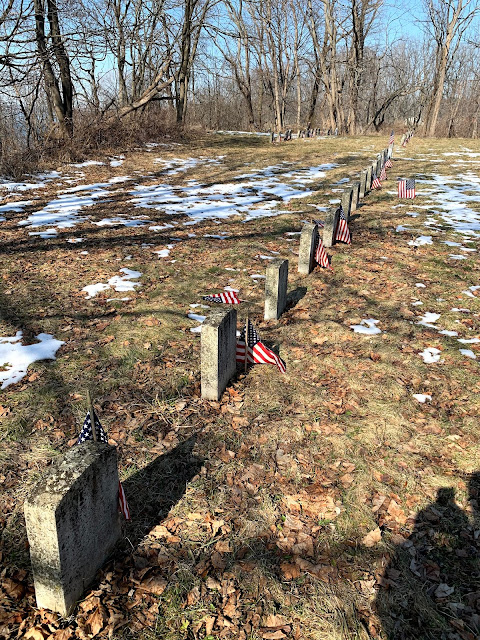 There are no marked plots for atheists, agnostics, Moslems, Hindoos, or any other faiths, but in a grove of trees that bisects two fields are 107 cast iron, numbered graves with no other information. 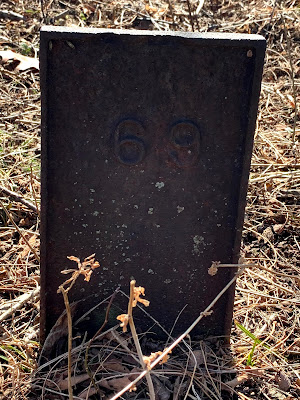 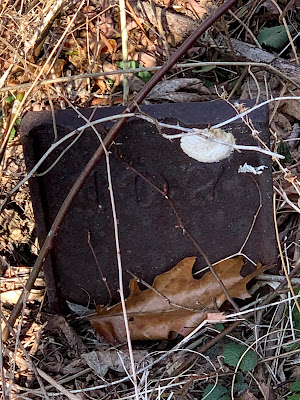 In today's post, I want to turn, briefly and ultimately, from this description of and these musings on my surroundings to a brief reflection on the history of the lazaretto (spellcheck wants to make it amaretto). In Italian, lazar, as the etymology above indicates, means someone affected with a disease, especially the disease of Lazarus, or leprosy. Of course, as far as I know, I have neither COVID-19 nor leprosy nor chronic insanity, but I am self-quarantined near an asylum so this is not a non sequitur. Furthermore, I did say to my host, as I was proposing to stay here, "Feeling like a pariah! Haha," though my host's legitimate worries have mostly subsided as I continue to be healthy. Still, this experience, where a guest on his property overheard us talking about the impending initial visit from the Health Department nurses, makes me reflect on the experience of Lazarus, of those who survived the Black Death, of the Yellow Fever (not that "yellow fever"!) in Philadelphia, 1793. In fact, in preparation for the now largely cancelled United States Academic Decathlon in China--ironically focused on health this year with a big chunk of reading on plague--I learned a great deal about buboes and transmission of disease by rodents. I also read a wonderful book for young teens called Fever, 1793, which described how people would avoid each other on the streets of Philadelphia in the days of Dr. Benjamin Rush, though Yellow Fever is not transmitted from person-to-person.

It is like that now in China. Masked, out for a walk in an abandoned park, you see someone coming the other way and both of you adjust or pull up your N95 masks and give a wide berth. You have no idea if the person could even give you COVID-19 if he tried, but we must behave that it is possible.

When I leave here, despite the fact that there will be virtually no chance that I arrived back in the US infected, will people still be worried to be near me? Of course there are those generous and/or foolish who would see me now, without waiting. Some may think that the God of Lazarus will protect them from being sick, perhaps because of their "good works"; others, because they perceive themselves to be healthy, young, virile. This is a disease killing smokers, as my friend Michael, who returned for a two week quarantine in China first observed. Those with already weakened lungs are succumbing at a higher rate than most, men more than women. In China, men smoke a lot.

Read more about the suitcase that is mentioned in this spooky video above.
Posted by 李喆老师 Alexander Lee at 4:12 AM