Voluntary Poverty: "You don't know how lucky you are..."

I am back in the PRC, boy. I had a wonderful time with friends and family while back in America. I was sad to leave but also happy to return to China.

Among the highlights of my trip home, much of it spent dressed in a my blue tangzhuang, was a tea party that I had with Liza Poinier, Bruce Clendenning and their two children. I am feeling very blessed and was particularly excited to hear how many of you have been reading my less and less frequent posts. I promise to get better about it again, spurred on by your appreciation. 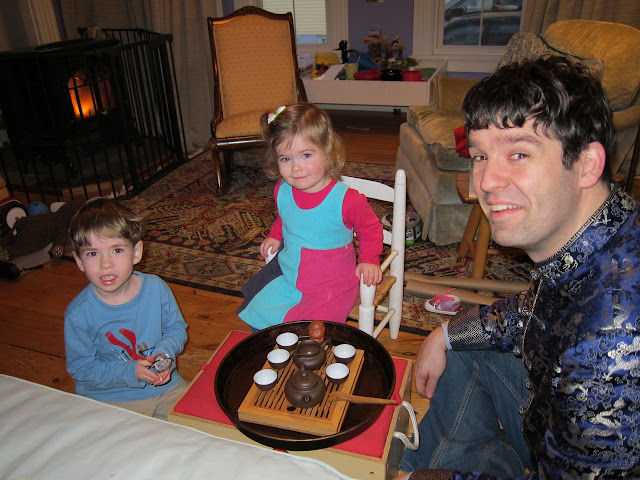 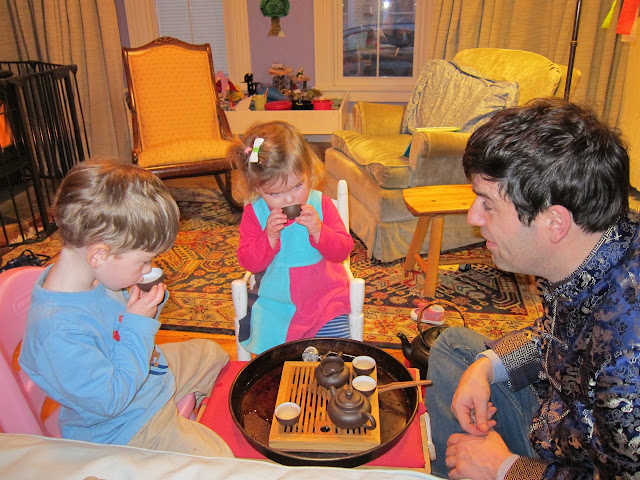 As you may know, my travel experience with Continental (United) was less than fantastic. This morning I was able to weasel a $50 gift certificate out of them, which I am sure is non-transferable and may have an expiry date, but it does at least make me whole for the meals we ate in Narita and for transportation costs of retrieving my bags personally from the Changchun International Airport.

I am also waiting to get my $5.30 back for the AAA-discount on my business class train trip to New York City. I can get a really nice dinner for that amount here.

An earlier post promised that I would try to live as frugally as possible for a couple months, but truth-be-told when I sat down to blog about living on 100yuan a week, I had nothing new or of interest to say. It is possible for sure, but the inconvenience and humiliation of being poor are the same here as they are in America. For instance, instead of spending to retrieve my bags from the airport, I would have had to wait three days for toiletries and clean underwear as the airline arranged for delivery by a courier. I would not have been on an international flight at all, if I was truly poor. That point is not lost on me, either. I would not have been able to have several meals at restaurants with friends who I missed while I was gone. Instead, I would have had to invite them to my house for meals and even this would have been rather more costly than just cooking for myself. It is very easy to contemplate being poor for a couple months when you just got three pair of new shoes for Christmas.

In truth, I think it will be far more interesting for you, my readers, if I do spend my money--taking Mandarin lessons, traveling about, buying tea, and dining out. What would Dorothy Day say? The vow of voluntary poverty taken by my friends at The Catholic Worker has always been something I have struggled to understand.

The Aims and Means of The Catholic Worker state:

"The mystery of poverty is that by sharing in it, making ourselves poor in giving to others, we increase our knowledge and belief in love." (Dorothy Day) By embracing voluntary poverty, that is, by casting our lot freely with those whose impoverishment is not a choice, we would ask for the grace to abandon ourselves to the love of God. It would put us on the path to incarnate the Church's "preferential option for the poor."

What do you think of this idea? Post comments.

The other extraordinary thing that I did on my sojourn home was to visit, with my parents, the Museum of Musical Instruments (MIM). If any of you find yourself in Phoenix or environs, I highly recommend this state-of-the-art museum.  As I did not have my camera, I will have to rely on the MIM itself for some visual support of my claim that this is the best new museum I have been to since the National Museum of the American Indian opened its galleries in the Alexander Hamilton U.S. Custom House in lower Manhattan in October 1994.

Set up by continent and then by nation, the museum is, as its website brags, the "most extraordinary museum you will ever hear." The dragon that greets you in the foyer was to be deployed during the following week in a celebration of The Year of the Dragon. In the experiential room, I got to play a gong and Gene Autrie's nickelodeon. It was just so much fun. I was like a kid in a candy store.
Posted by 李喆老师 Alexander Lee at 11:55 AM