Football (aka "soccer" or zu qiu) and VW

Getting ready to set out to Qingdao on vacation this Friday. After that, I embark on the energy trip. You will start to see a flurry of posts.

Last Saturday night, I attended my first Changchun Yatai soccer game. They played their first ever exhibition (friendly) game against a European team. That team was Vfl Wolfsburg--a club that grew out of a multi-sports club for Volkswagen workers in the city of Wolfsburg. It is a wholly owned subsidiary of Volkswagen Group.

As you may recall from previous posts, Changchun is the "Detroit of China." This city builds most of the world's high-speed trains and a large number of the millions of cars that China produces each year. One of the biggest car companies in the city to have a joint venture with FAW is VW.

FAW company is currently one of the "top 4" Chinese automakers along with Chang'an Motors, Dongfeng Motor, and SAIC Motor. As of 2011, its production of more than 2,372,700 units allowed the company to round out the top three Chinese vehicle manufacturers.

One of my cynical compadres suggested this game was a junket for the VW executives. Perhaps. This game came at interesting time for FAW-VW, which shipped in hundreds of workers on buses to fill the stands. Last week an important story broke in the German business daily Handelsblatt. The Wall Street Journal picked up on the story and then Sam Blackstone wrote a sensational piece for Businessweek:

In what's turning into a warning for all car companies hoping to capitalize on the Chinese market, China's First Automotive Works (FAW) is allegedly copying Volkswagen's Golf and Polo model transmissions, then putting them into their own cars, reports German newspaper Handelsblatt.

To manufacture cars in China, foreign car makers must join in partnerships with one of China's domestic, state-run car companies. While opening the door for opportunities at piracy, many foreign car companies see it as a necessary risk, given the huge opportunity in sales China presents. In April, VW took this risk when it extended its joint venture contract with FAW, Chinese Prime Minister Wen Jiabao and German Chancellor Angela Merkel there to witness the occasion.

But is the risk worth the reward? For VW, it appears so. Last year, VW sold 2.26 million cars in China, 27% of total sales for the German car maker. In the first half of this year, the number grew 17% to 1.3 million.

Given this fact, VW doesn't really want to burn any bridges. In addition, even if the allegations are true, they can't legally do much until FAW comes out with its Besturn B50 in 2013, FAW's small car model believed to be the model in question.

FAW seems to recognize their chance, too. According to engineering firms whom work with VW, FAW has built a manufacturing factory in Changchun where it plans to start churning out the Bestrun B50. 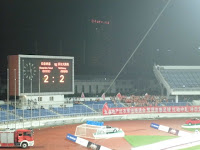 I would not learn the result of the game until morning. We left ten minutes before the game was over when it was tied 2-2. In the 85th minute (soccer games are 90 minutes, my American readers) Iranian national team winger and Vfl Wolfsburg fan favorite Ashkan Dejagah scored the winning point. We left early in hopes of finding a cab, but that was a nearly impossible venture and we spent close to an hour--long after the game ended--flagging down taxis. Eventually, we split into two groups and some of us (not me!) allowed ourselves to be hustled for by the cabbies for an extra 20RMB.

The game itself cost 100 RMB (cheapest tickets were at 80RMB). It was section seating with no assigned seats and we were in Section 10. You can see from this action shot early in the game that the bleachers were quite full on both sides of the stadium. 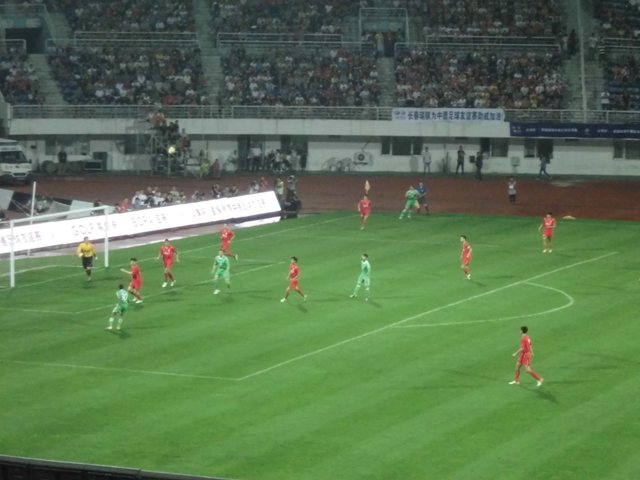 Posted by 李喆老师 Alexander Lee at 4:58 AM